As part of President Emmanuel Macron’s drive to “reconcile” France with its imperial, colonial legacy, a new French government-commissioned report has corroborated the thesis of France’s political involvement in the genocide that saw at least 800,000 people killed in Rwanda in 1994.

Titled, “France, Rwanda and the Tutsi genocide (1990-1994),” the report documents the “heavy and damning responsibilities” by the French in the Rwandan genocide. As well as offering a scathing assessment of France’s military and political involvement in the Rwandan tragedy, it casts a sharp light on French post-imperial nostalgia. However, it dismisses the “French complicity” thesis supported by critics, including by the post-genocide, Paul Kagame-led Rwandan government.

President Mitterrand in bed with the Rwandan regime

The document, which a group of historians submitted to President Macron on Friday, takes the view that both Francois Mitterrand, who was the French president at the time of the genocide, and his inner circle “blindly” supported the ethnocentrist and extremist rings of the Rwandan regime in the early 1990s. It lampoons France’s political “failure” and its “overwhelming responsibilities” in the 1994 genocide.

Commissioned in 2019 by President Macron, who is adamant that France should reckon with its imperial past, the report is the fruit of the collaboration of 14 historians under the supervision of Vincent Duclert. Its conclusions are the culmination of two years of analysis of archives relating to French policy in Rwanda between 1990 and 1994.

Despite boasting a substantial military and political presence in Rwanda in the 1990s, France “remained blind to the preparation” of the 1994 genocide of Rwandan Tutsis and bears considerable responsibility for the tragedy, said the report.

The document also provides a painstaking review of the French government’s guilty hand-off approach during the “decisive years” of the genocide, from the extremist turn of the Hutu-led Rwandan regime to the setting of the political scene for a killing spree that lasted between April and July 1994.

By the second half of 1990, when the offensive by the Rwandan Patriotic Front (RPF), a former Tutsi rebellion led by Paul Kagame, now President of Rwanda, started gathering steam, Paris passionately and “blindly” took up the cause of the Habyarimana regime.

“The EMP bears considerable responsibility in the installation of a general hostility of the Elysee towards the RPF,” writes the report. By closely scrutinizing diplomatic telegrams, confidential notes, and various other administrative letters, the report concludes that the genocide could not have happened without President Mitterrand’s and his entourage’s rationalizations and “ideological constructions” motivated by their desire to accommodate the extremist forces of the  Rwandan regime.

It argues that France’s befogged and “ethnicist” reading of the Rwandan situation led Paris to provide “unconditional” support to the “racist, corrupt and violent” regime of Rwandan President Habyarimana so he could crush a Tutsi rebellion. France’s “blind …  alignment with the Rwandan government” was the result of President Mitterrand’s “strong, personal and direct relationship” with Rwanda’s Hutu President Habyarimana, according to the report.

On the more ideological front, France’s Rwandan policy was a direct offspring of Paris’ post-imperial obsession to maintain Rwanda within its “francophonie” empire. For the French regime, the perception that the Tutsi rebellion, whose leaders were based in English-speaking Uganda, would most likely ditch French in favor of English as Rwanda’s official language, justified “the delivery of considerable quantities of arms and ammunition to the Habyarimana regime, as well as the extensive involvement of the French military in the training of the Rwandan Armed Forces.”

The genocide officially started on April 7, 1994, just one day after the attack on President Habyarimana’s plane. But the report does not dwell on the crash, nor does it name the perpetrators or sponsors of the attack, leaving doors open to yet more controversy to feed the decades-long speculations about who is responsible for the crash that plunged Rwanda into four months of indescribable brutality.

Despite the death of France’s protege President Habyarimana, the report notes, Paris did not reverse or even review its Rwandan policy. Instead, it remained obsessed with what it saw as the avowedly anti-France cultural and political paradigm shift that the Kagame-led rebellion represented.

At the height of the genocide and under intense international condemnations in June 1994, France took charge of the UN-mandated military, humanitarian operation, Operation Turquoise, aimed at “stopping the massacres.”

Even here, however, the report harshly assesses France’s belated humanitarian awakening. It was humanitarianism with an asterisk, says the report, adding that Operation Turquoise has a decidedly controversial legacy. It undoubtedly “saved many lives, but not those of the vast majority of Rwandan Tutsis exterminated in the first weeks of the genocide.”

To make matters worse, the report concludes that, even after the genocide, French authorities “refused” to cooperate with the new, Kagame-led Rwandan government to arrest the masterminds of the genocide, most of whom had found safe havens in France or other places known to French intelligence.

President Macron has earned legions of admirers and defenders for his professed determination to come to terms with France’s colonial heritage and sincerely “reconcile memories” with the country’s former colonies. The debate over the return of looted African artifacts and the newly-submitted report on French-Algerian memories are just two instances of Macron’s radically novel approach to many of France’s historically taboo and deeply polarizing debates.

With the Rwanda report’s bombshell findings confirming most of the theses that critics of France’s imperial complex have long held, many observers contend that the document could herald the beginning of a u-turn in the relationship between Paris and Kigali.

Vincent Duclert, who led the 14 member-team that put together what he sees as a much-needed report, agrees with the reading that the long-overdue report can indeed be an icebreaker when it comes to France and Rwanda’s strained relations. He cautions, however, that Paris should effectively face up to the darkest chapters of its imperial and neocolonial legacy to make the other party believe the sincerity of its reckoning.

“The Rwandan dossier has been contaminated by lies, manipulation and passion,” the historian said in an interview with Le Monde, arguing that those are some of the state-sponsored attitudes and policies Paris has to break when dealing with Rwanda and Africa in general. 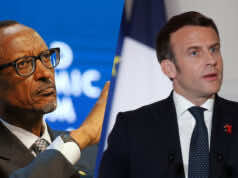