As the Biden administration seeks to de-escalate the stand-off with Iran, US Republicans and Israel are actively seeking to hinder the talks altogether

Rabat – US President Joe Biden’s attempts to revive the Iran nuclear agreement are being actively sabotaged by both US Republicans and Israel. This week, Israel attacked an Iranian vessel with limpet mines, according to the New York times. Meanwhile US Republicans have penned a letter that emphasizes that any political changes in the US could rubbish the agreement in the future.

The Biden foreign policy team appears to be attempting to diffuse the major escalation of tensions with Iran under the Trump administration. In Iran, scepticism persists over the long-term validity of an agreement with the US after the trauma of the Trump withdrawal from the 2015 “Iran Nuclear deal.”

Sanctions imposed by the US following this withdrawal caused major hardships in the country and according to the UN have contributed to Iran’s high death toll caused by COVID-19.

US Republicans “not bound” by agreement

Reporting by the Washington Free Beacon on Thursday, April 8, uncovered how US Republicans are actively undermining the US-Iran talks. In a letter to the Biden administration, US Republicans announced they would not consider themselves bound by any new nuclear agreement with Iran.

The remarkable letter, addressed to US Secretary of State Anthony Blinken, states that Republicans in Congress are “pledging to oppose, and to work to reverse, any sanctions relief for Iran.” The only way in which they consider supporting the administration’s foreign policy decisions, is if Iran submits to demands made by the Trump administration.

The letter actively undermines US foreign policy decisions by the country’s ruling administration, and appears to be directed at Iran directly. It emphasizes that Iran can have no faith that future US administrations will uphold any signed agreement, which directly erodes any promises the Biden team can make in the negotiations.

As officials representing the US and Iran met for talks in Vienna on Tuesday April 6, Israel warned the US that it would attack an Iranian vessel anchored in the Red Sea. The cargo ship in question, the MV Saviz, is believed to carry Iranian troops, which Iran states are there for “anti-piracy” reasons.

As negotiators discussed a possible peace deal in Vienna, operatives from Israel detonated limpet mines on the vessel, causing damage to the ship. Limpet mines have been a scourge on local shipping in the region, and Israel’s apparent admitted use of the mines this week could signal Israel’s involvement in Trump-era attacks on ships that increased tensions with Iran.

The UN condemned the attack, and called for “maximum restraint” in order to prevent “escalatory actions.”

Despite the attack on Iran’s vessel in international waters, negotiations in Vienna continued in good faith, with both the US and Iran describing talks as “constructive.”

Yet, the provocative opposition to the agreement coming from a significant chunk of US politicians as well as it’s self-proclaimed key ally Israel directly undermines the agreement.

If talks collapse, Iran will feel forced to again ramp up nuclear development, the only trump-card it holds to force new negotiations.

Once Iran takes this logical step, expect US republicans and Israel to be the first to decry Iranian “aggression” and “provocation.” 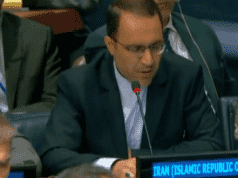