This is not the first time unidentified people carried out similar attacks against Morocco’s national symbols.

One of the individuals was filming the incident. The two other men,wearing helmets and work vests, were shown climbing the embassy building and removing the  Moroccan flag to throw it in the ground.

They were apparently attempting to replace the Moroccan flag with a white flag featuring a written statement. But they could not succeed as a woman in the embassy came out to verbally condemn and oppose the men’s hostile attack.

Another man came in rush to help the woman and followed the perpetrators who escaped the scene by running to their car.

The incident caused uproar among Moroccan internet users, who condemned the acts and urged Germany to take the “required legal actions” against the individuals.

German authorities have not yet reacted to the incident.

This is not the first time that such events happen.

In March, a viral video of people storming the consulate of Morocco in Den Bosch in the Netherlands stirred backlash.

The press identified one of the perpetrators as Karim Aaril, a self-described separatist from the Rif region in northern Morocco.

The man appeared to be making hostile remarks against Morocco and desecrating the Moroccan flag.

He also poured a blood-like liquid on the sign near the consulate entrance, hanging a white, separatist flag with “long live the people.”

The Dutch government condemned the attacks and vowed to take all security and legal actions against the perpetrators. 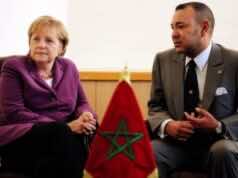