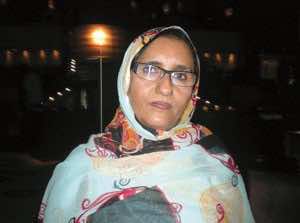 In fact, according to some sources close to the Guerrila movement, the Polisario Front Secretary General, Mohamed Abdelaziz flew into a  “homeric” anger while knowing that the name of his wife khadija as well as his defense Minister were on a CD-ROM widespread in Tindouf camps, few weeks before the holding of the movement congress. The concerned CD-ROM reveals the involvement of Khadija Hamdi and Mohamed Lamine El Bouhali, respectively Minister of Culture and Defense in the SADR government, in affairs of misappropriation of phenomenal sums of money generated from humanitarian aids and foreign donations.

The DR-ROM lists accounts and sums of money as well as copies scanned to justify the afore-mentioned. Contacted by phone, a fluent member from the R’guibate tribe in Tindouf camps, has specified that the old Abdelaziz became very furious as soon as he has seen a copy of the CD. He immediately called for an urgent meeting with his men in charge of security services. He ordered them to start two investigations at the same time: one to “verify” with no hurry, we never know, if the allegations against his wife and his Defense Minister are true and the other one to discover and arrest all those who are behind the idea of diffusing such a CD-ROM which calls also the population in the camps to sit-in and demonstrations. According to the same source, the CD-ROM was conceived and distributed in Tindouf camps by new militants from the League of supporters of autonomy in the Moroccan Sahara in Tindouf.

The CD-ROM speaks of important sums of money asked for on behalf of the Sahrawi populations to foreign institutions before being directly paid into personal accounts of Khadija, daughter of the deputy and president of the municipal council of Tindouf city, the Algerian Hadj Hamdi. The CD denounces also the senior corrupted Polisario leaders who have become rich through the misappropriation of international aids and funds which they receive as donations either by checks or cash, from NGOs and foreign associations who want to help the penniless part of the population of Sahrawi refugees.

Moreover, what has increased further the anger of Mohamed Abdelaziz,  is the sit-in that hundreds of young Sahrawis have organized last week in front of his general headquarters in Rabouni, hoisting the Moroccan flags. The chief of the Front, suffering from a mysterious disease, has considered this action as an insult which he can not accept, while he is preparing for a new mandate at the head of the Sahrawi Republic and the Polisario Front. The 13th Congress of the Polisario Front, many times postponed, should take place in the second half of the coming December, to elect the new leadership. Mohamed Abdelaziz has ordered his armed militia to use all their means to subdue any attempt of rebellion or demonstration with a political aspect, in Tindouf camps.