New York - Two days after the announcement of the final results of the legislative elections, held on Friday 25 November, King Mohammed VI received, on Tuesday in Midelt (central Morocco), Abdelilah Benkirane, Secretary General of the Justice and Development Party (PJD), and appointed him Head of Government (Prime Minister), the Ministry of the Royal Household, Protocol and Chancellery announced in a statement. 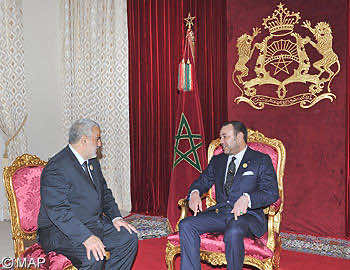 By
Adnane Bennis
-
Adnane Bennis is a national of Morocco, obtained his Bachelor’s Degree in Computer and Information Science from East west University in Chicago.
Nov 29, 2011
Spread the love

New York – Two days after the announcement of the final results of the legislative elections, held on Friday 25 November, King Mohammed VI received, on Tuesday in Midelt (central Morocco), Abdelilah Benkirane, Secretary General of the Justice and Development Party (PJD), and appointed him Head of Government (Prime Minister), the Ministry of the Royal Household, Protocol and Chancellery announced in a statement.

Immediately after his meeting with King Mohammed VI, Abdelilah Benkirane told the press that he “was honored to be received by the King, who entrusted him with the responsibility of forming a new government.”

With 107 seats in the 395-seat House of Representatives, the Justice and Development Party (PJD) won a landslide victory in the parliamentary election, held Friday in Morocco. This is the first time in Morocco’s history that a political party wins more than a quarter of seats in parliament.

In a press conference held in the party’s headquarters in Rabat on Sunday, following the announcement of his party’s win of 107 seats in the legislative elections, Abdelilah Benkirane told reporters that his “party remains open to other political parties, save for one political party with which we had big differences”, in a reference to the Party of Authenticity and Modernity (PAM), which obtained 47 seats.

The PJD’s Secretary General also expressed his party’s readiness to form a coalition with the parties of the Democratic Bloc (Koutla) made up of the outgoing Prime Minister, Abass El Fassi’s, Istiqkla party (independence), which obtained 60 seats and the party of the Socialist Union of Popular Forces (USFP), which won 39 seats and the party of Progress and Socialism (PPS), which obtained 18 seats.

The party of the National Rally of Independent and the Party of Authenticity and Modernity (PAM), which belong to the bloc Coalition for Democracy composed of eight parties (G-8) will be in opposition.

PAM will “fully assume its constitutional and political role in favor of the causes of the nation and the citizen for the establishment of a democratic country,” the party said in a statement following a meeting of its National Bureau on Saturday to examine the preliminary results of the parliamentary elections.

This is the first time that the PJD will be entrusted with the task of heading the government, after it spent 14 years in opposition. In its first participation in the elections in 1997, it obtained 8 seats.

In the first elections held under the rule of King Mohammed VI in 2002, it obtained 42 seats and in 2007 it won 47 seats and came in second position after the Istiqlal party, which won 52 seats.

During its electoral campaign the PJD promised to fight against corruption and high unemployment, cut poverty in half and raise the minimum wage by 50 percent.

Since his enthronement in 1999, King Mohammed has won international praise for his effort to promote human rights in the country and lay the foundations of a genuine democratic system. But the reform drive of his earlier years in power has lost momentum in the last few years.

When demonstrations inspired by the Arab Spring flared in February, The king responded by modifying the constitution to give the next parliament and prime minister more powers, and held early elections.

Last week’s legislative election was the first election in the north African country since the King Mohammed VI introduced constitutional reforms that were overwhelmingly adopted in a referendum held last July.

This is the third time in Morocco’s recent history that the King appoint the Chief of Government from the party that won the elections. The first time was in 1997 when the party of the Socialist Union of Popular Forces, led by Abderrahman Youssefi, was placed first in the elections. Soon after the polls, the former opponent of the late King Hassan II was appointed Prime Minister.

In the 2007 elections, the Istiqlal party of the Abbas el Fassi, was the winning party, as it obtained 52 seats and Abbas el Fassi was entrusted with the task of forming a coalition government.

Uphold relations with the West

In earlier statements right after the announcement of the provisional results of the parliamentary elections, Secretary General of the PJD, Abdelillah Benkirane, told the press, that his party will uphold Morocco’s longstanding relations with the US and the EU. “What we claim, today, is to work together, in a democratic way, within the framework of balanced ties,” he said.

He assured Moroccans that the PJD will not interfere in their daily lives. He stressed in a statement carried by the German news agency DPA, that: “despite its Islamic leanings, the Justice and Development Party will not interfere in the affairs of Moroccans,” referring to the strategy of the party to avoid going into the issues that stir controversy such as consumption of alcohol or the wearing of headscarf.

Abdelilah Benkirane said in a statement carried by AFP, Western nations, on whose investment and tourism the country relies heavily, had no reason to fear a PJD-led government. “With the PJD there will never be surprises,” he said.

“We are going to develop relations with the West.”

He also emphasized the need for Morocco to further reinforce relations with Arab, African and Muslim countries.

The victory for Morocco of the PJD came a month after Tunisia’s Islamist party Ennahda was elected in landslide victory. Egypt’s Muslim Brotherhood is also expected to do well in the election that took place  yesterday.