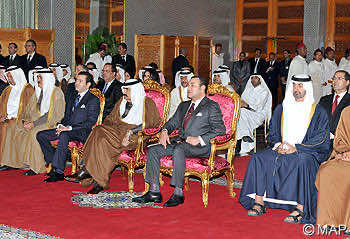 This spasmodic Arab relationship based on conspiracy theories, leads to never-ending accusations on the intentionally of the slightest mistake that is committed by any party. Arabs tend not to forgive each others’ mistakes. Usually, the Arab zealotry and ardor can only be successfully acted upon when an Arab adversary is spotted. Yet, virtues of patience, serenity, and peace are well adopted at other non-Arab fronts.

This time, the attacks of Moroccan hackers to avenge on the displaying of a shortened map of Morocco in the Arab Games is not a sign of rapid deterioration in Moroccan-Qatari relations. We should not forget the official Qatari standpoint that has affirmed several times support of the Moroccan cause in defending its legitimate territories, based on a mistake of an Australian advertising firm sponsoring the overture of the Arab Games that neglected to display the whole map of Morocco.

This is not as important as the frank standpoint of Qatar’s top state officials. We likely seem to underrate the importance of Qatari investments in Morocco’s markets that were carefully chosen by Qatar looking to promote the Moroccan economy and political stability. Qatar is exposed to risk its historic relations with Algerians, who expressed their unease with the sudden political and economic rapprochement between Morocco and the Gulf states upon the request of the later to join its council.

However, the Qataris have carefully studied the conditions in which they will invest their wealth with awareness of the sensibility of political positions that usually hinder Arab-Arab relations and economic cooperation. Hence, we have witnessed a Qatari shift towards a logical stance concerning the Moroccan-Algerian historic conflict.

Obviously, Moroccan diplomacy did not initiate this systematic approach towards Qatar. Whereas, Qatar has actively been involved in the political events underway in the region, so the seemingly interactive and energized Qatari diplomacy is always ready to form new coalitions based on common and favorable interests.

The recent visit of the Emir to Morocco is evidence of the inventiveness and willingness to have a serious and valuable relationship between the two countries. Therefore, it is illogical to suspect a conspiracy scheme against Moroccan interests. The good intentions of Qatar was demonstrated by its prompt action to resolute the issue. This was demonstrated by the Emir personally ordering the organizing committee to correct its mistake.

However, those supposedly “white hackers” driven by nationalistic pride are, since last week, still attacking several websites of the Qatari government and others vital to the political and economic sectors, including the website of the Arab Games and the Ministry of Foreign Affairs, as well as an unsuccessful attempt to attack the Qatari Stock Exchange. But the imbroglio they have caused cannot serve a positive outcome. This near pandemonium will do nothing to change Qatar’s already supportive political positions though it may worsen relations between the two parties.

Here, Moroccan diplomacy should interfere to stop these relentlessly annoying activities of the Moroccan hackers who claim they are defending Morocco’s interests. The suspicious silence leads to reasonable doubts about the official standpoint of Rabat.