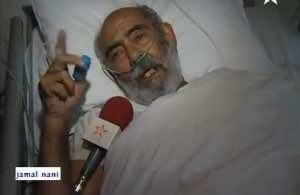 Aged 73 years old, Mohamed Majd, a distinguished Moroccan actor, passed away this morning at a Casablanca clinic. Having suffered from a respiratory chronic illness, the actor could no longer bear his breathing.

According to his wife Fatiha, an actress, Mohamed Majd’s  health severely deteriorated following the attendance of the latest Dubai Film Festival.

Known as one of the most successful actors in the realm of Moroccan cinema, the late Mohamed Majd won a number of  awards and prizes, particularly for his outstanding role in ” Waiting for Pasolini”, a film directed by Mr. David Sons.

Born in Derb Sultan, Casablanca, the actor made his debut in theater and then he moved to take part in television programs, chief of which is “Sacrifice”.

During his outstanding acting career, Moamed Majd tried his hand at several short films, such as “Jungle and Bright”, directed by Mr Rashih. Later in life, he managed to play in “the Message” by Moustapha Akkad.

It is expected that his funeral will be attended by a number of prominent actors, artists, and film directors. Noted for his remarkable success at the seventh art, the late actor is so much appreciated and admired by so many cinema vultures.