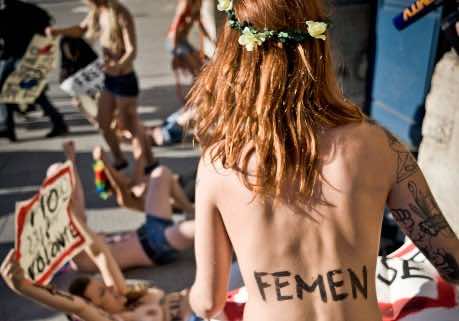 Detestable topless activists unabashedly staged demonstrations opposite mosques in several countries across Europe to support FEMEN activist Amina Tyler, a Tunisian national, in her battle against what they dubiously claim is an Islamist crackdown on Arab women’s rights. “Bare breasts against Islamism” and “our boobs will be stronger than their stones” are some slogans, among others, painted on bare-breasted protesters’ torsos of women who took part in the “International Topless Jihad Day” organized by the Ukraine-based group FEMEN as a new form of demonstration, known as “Nude Strikes.”

The FEMEN’s latest nude strike caused a raucous all over Muslim countries and has goaded female supporters and opponents to respond to the campaign in different ways; some argue vehemently striking bare-breasted to defend women’s rights is an absolute right that falls within freedom of expression regardless of the medium used ; while others think that freedom of speech should be governed by limitations and therefore should not cross the borders of decency, chastity and continence.

A woman stripping to the waist with provocative tags on her breasts is unlikely to be interpreted by anybody with a sound mind as an act of freedom of speech. Public nudity is, or should be, an offence outraging protocols of public decency and therefore must be punishable by law just like any other public nuisance misdemeanor. If inciting hatred, libel, slander and sedition are all punishable actions, why should public nudity be treated as an exception though it is undoubtedly an antisocial behavior!

The double-edged sword interpretation of freedom to express one’s ideas and opinions is sometimes the real bone of contention behind various socially unacceptable conduct perpetrated by scandal and trigger-happy activists. It is true that the legal language can be flowery and flimsy in the most liberal sense of the word but poring over the Universal Declaration of Human Rights’ Article 19, one finds that it stipulates “everyone has the right to freedom of opinion and expression; this right includes freedom to hold opinions without interference and to seek, receive and impart information and ideas through any media and regardless of frontiers.” This is more than enough to deduce that my freedom ends where yours begins.

“MY BODY BELONGS TO ME” was the hackneyed phrase used by the so-called Tunisian activist Amina Tyler to emblazon her naked breast and to post pictures on the one-billion-member social network Facebook for the sake of sparking a scandal to undermine the ethical and moral stability of a relatively conservative society like Tunisia.

Nudity fever has extended to Morocco through FEMEN MAROC when they created a Facebook page to mobilize more bare-breasted women  in support of their ‘liberty cause.’ Apparently, however, their campaign fell flat and went down swinging with the very flimsy sympathy it has amassed. The page administrator and her disciples were left alone rolling with the punches of the Moroccan Youth Campaign against Immorality that collected hundreds of Hijabists’ pictures from many Arab countries to denounce the newly-adopted atrocious and hanky-panky nudity culture.

The true man should be proudly walking the earth as the stars fly in the sky, grandly and blindly obedient to those laws which are implanted in our nature to avoid chaos, mob-rule and living in a topsy-turvy society. Both men and women can go naked as long as they are behind their curtains without forcing other people to watch their nefariously cheap and wayward scenes of obscenity in public, regardless of the motives. We all know that what makes the difference between human beings and animals is ‘REASON.’ Let’s then pay a sharp ear to our reason to upgrade our status from a repulsive caterpillar into a lovely butterfly instead of listening to our hearts to turn our beautiful butterflies into nasty caterpillars.