London- Malala Yousafzai was reduced to fits of laughter on Friday by Queen Elizabeth II’s husband Prince Philip as she met the royal couple at Buckingham Palace. 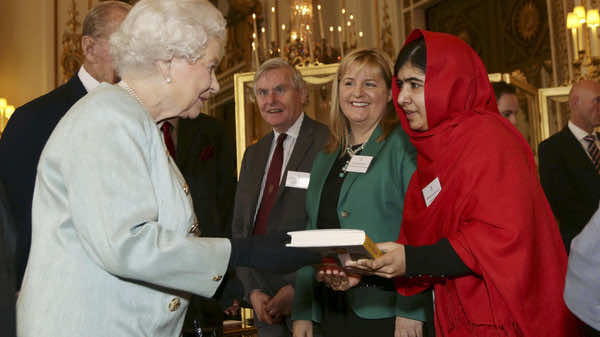 London- Malala Yousafzai was reduced to fits of laughter on Friday by Queen Elizabeth II’s husband Prince Philip as she met the royal couple at Buckingham Palace.

The 16-year-old, who was shot by the Taliban for championing girls’ rights to an education, met Queen Elizabeth at a reception for youth, education and the Commonwealth.

The activist survived being shot in the head on her school bus on October 9 last year and was sent for treatment to Britain where she now lives.

Malala, accompanied by her father, gave the queen a copy of her autobiography, “I Am Malala,” telling her: “It is a great honor for me to be here, and I wanted to present you with this book.”

Accepting the gift, the 87-year-old monarch replied: “That’s very kind of you.”

Malala told the queen, who is head of the Commonwealth, that she was passionate about every child around the world having a right to an education.

“Especially in this country as well,” she added.

“I have heard about many children that can’t go to school, and I want to continue our work.”

Prince Philip, 92, joked that in Britain, people wanted their children to go to school to get them out of the house — a comment that left Malala covering her face in a fit of giggles.

The reception, in the palace’s White Drawing Room, was attended by 350 guests from academic institutions around the world.

After the attack, Malala was flown to Britain for specialist care at the Queen Elizabeth Hospital in Birmingham, central England, named after the present monarch’s late mother.

She has continued her education in the city while being feted in the West, addressing the United Nations and meeting U.S. President Barack Obama although she was passed over for the Nobel Peace Prize last week.

At an event in Edinburgh on Saturday, Malala is set to be reunited with the two school friends who injured alongside her.