CAIRO- At least 22 people were killed in Egypt when a train crashed into a mini-bus and other vehicles south of Cairo early Monday, a health ministry official said. 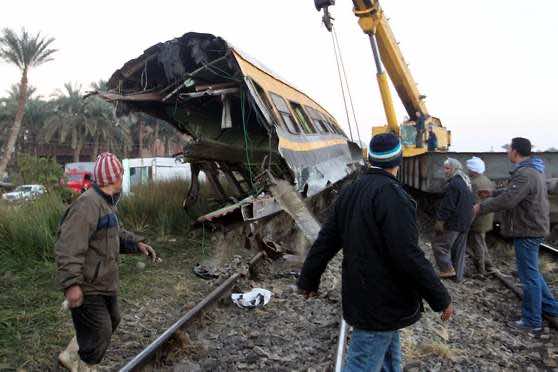 CAIRO- At least 22 people were killed in Egypt when a train crashed into a mini-bus and other vehicles south of Cairo early Monday, a health ministry official said.

State television said the train crashed into three vehicles, including a mini-bus, at a crossing. “Twenty two people have been killed,” the ministry’s Ahmed al-Ansari told state television, adding the final toll was not likely to increase by much.

At least 15 people were injured in the accident, police officials said, requesting anonymity because they were not authorised to make media statements. A railway official told the official MENA news agency the vehicles involved
in the accident drove past chains closing the crossing to traffic.

The  police officials had said the train was carrying passengers, but the head of the Egyptian Railway Authority said it was a cargo train. Ambulances rushed to the scene to take the wounded to hospitals in the capital, police said.

The accident took place days after train services resumed completely across the country, after they were halted due to unrest following the overthrow of president Mohamed Morsi in July.

Egypt has seen several train disasters in recent years. In November 2012 47 school children died when a train crashed into their bus, and in January, 17 people died when a train transporting conscripts derailed.