By
youssef sourgo
-
Youssef Sourgo is currently a Master’s student in Linguistic and Literary studies at Ain Chok Faculty of Letters and Humanities.
Dec 24, 2013
Spread the love

Casablanca- “Lala Salma, princess consort of Morocco and wife of King Mohammed VI, shines up as a towering inspiration and an emblem of hope for all Moroccan women,” says Gala, the French celebrity magazine, in a recent, video on Princess Lala Salma, “the exceptional Arab woman.”

“The once shy and discreet young woman, who was raised by her maternal grandmother in a popular neighborhood in Rabat after the death of her mother when she was still 3 years old, is now one of the most influential public figures in Morocco,” notes the French magazine.

Gala further spotlights the Moroccan princess by listing a number of accomplishments, one of which is being among the 50 most influential figures in the Arab World.

“Multitudinous testimonies,” Gala reminds us, “have ascribed qualities of independence, humanitarianism, empathy, modesty and an exceptional character to the Moroccan princess.”

“Subtle, yet certain, her revolutionism is manifested in versatile actions, one of which is her invaluable contribution to the reform of the Moroccan family code (moudawana), by eradicating all sorts of discrimination against Moroccan women,” attests Gala.

The prestigious magazine also shed light on Lala Salma’s exceptionality and distinctiveness as the first wife of a Moroccan ruler to be publically acknowledged and celebrated. “Lala Salma has been the transition to a new age of more contributive and active female royal members in Morocco,” says Gala.

“Lala Salma,” the magazine describes, “has given a new fragrance to the monarchy, being a normal, down-to-earth woman, who has appeased the sanctity of the monarchical life and has drawn closer and stronger ties with the Moroccan people.”

The French magazine also shares Lala Salma’s predilections “for sports, driving her car on her own, as well as her love for travelling, one she shares with her spouse the King.” The popular princess celebrates her femininity similar to every free, modern and strong woman.

Lala Salma has represented the idiosyncratic and sublime Moroccan feminine on international occasions, and stood out of the crowd as a majestically elegant and royally beautiful, earning her international acknowledgment and popularity.

“Yet, her concerns are principally social,” emphasizes the French magazine. “Even before her royal marriage, she visited slams, and showed concern for the impoverished and the weak by significantly taking part in associative initiatives.” Lala Salma’s Cancer Prevention Association stands as an illustration of her diligence and devotion towards social causes.

From launching campaigns against smoking, facilitating the access to healthcare for impoverished low-class Moroccan citizens, to contribution to the modernization of the health sector, Lala Salma has become a social reformer par excellence. Her accomplishments and contributions have been awarded and recognized internationally.

“HM Mohammed VI’s spouse, HH Lala Salma, is a respectful woman, firmly anchored in her epoch, who contributes indefatigably to the emancipation of Arab women, the fight against ignorance, fanaticism and terrorism…Moroccans are now celebrating the efflorescence of an icon,” concludes the French magazine, quoting the pan-African newsmagazine, Jeune Afrique. 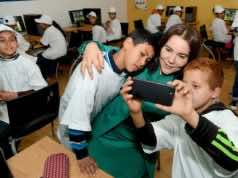 “King and Princess of Style” Steal Public Attention in Miami