A few days ago, the 20 February Movement celebrated its third anniversary, flavored with dismal failure. 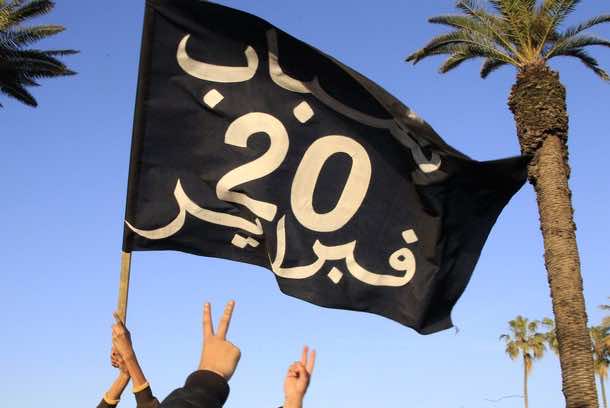 By
Aziz Allilou
-
Aziz Allilou is a student at the Higher Institute of Media and Communications (ISIC) and Morocco World News correspondent in Rabat.
Feb 22, 2014
Spread the love

Rabat – On this day in 2011, the 20 February Youth Movement, a group largely consisting of students, led a series of demonstrations across Morocco. This occurred from 20 February 2011 to the spring of 2012.

The Movement convinced thousands to take to the streets of Rabat, Casablanca, Tangier, and Marrakech in peaceful protests. They demanded a new constitution, a change in government, and an end to corruption.

Since then, a new constitution and government have been put in place, but the number of people affiliated with the Movement has dwindled. In recent months, its demonstrations have struggled to gather even a few hundred people.

Now, the protests have stopped, and the gatherings have separated. The question is, did the 20 February Movement succeed or fail?

Many Moroccans have personal opinions about the Movement; some think it was a good initiative that achieved reforms in the Kingdom, while others believe that the 20 February Movement failed due to a lack of specific orientation.

Morocco World News listened to citizens expressing their opinions about the 20 February Movement.

On the one hand, several Moroccans expressed positive attitude toward the Movement, insisting that Moroccans no longer have fear.

“20 February broke the wall of fear and silence,” said Karima el-Wattasi. “Now, our voice is heard by the decision makers. And many reforms have been lunched after the 20 February protests,” explained the 25-year-old student at Kadi Ayad University in Marrakesh.

She added, “Moroccan youth led peaceful protests demanding a new constitution, a change in government, and an end to corruption. These are mature demands.”

Abdelah Jari, a 40-year-old English teacher in Casablanca took part in the 20 February Movement. He stated that on February 23rd 2012, “the National Council for Support of the Feb 20 Movement, also known as the Support Council, was created in Rabat by forty political and civil society groups. This included the DAL, AMDH, ATTAC, Annahj, and Al Adl parties.”

“All [parties] committed to the ground rules that the Casablanca branch had set days before: no distinctive features, slogans, or banners would be tolerated for any political group. Everyone would be behind the 20 February banner and accept the youth’s slogans and overall guidance,” he added.

For Latifa Souilah, a high school teacher in Agadir, the Movement’s influence was undermined to a large extent “by the adoption of the Constitution by overwhelming majority in the second half of 2011. This gave enhanced powers to the government and a historic victory for the Islamist Justice and Development Party,” she explained.

Supporting the Movement, Younes Souis a student in Dhar Lmehraz University in Fez said, “thanks to 20 February, Morocco’s 2011 events were a perfect tale of popular protests with a happy ending.”

He added, “after huge pro-democracy demonstrations broke out, the government complied without firing a bullet and a reformed constitution was approved by popular referendum.”

On the other hand, other citizens expressed negative attitudes toward the Movement, stressing that it was led by unknown figures. This discouraged Moroccans to join the crowds on the streets.

“Demands were not clear and specific due to the lack of coordination among the founders, since it included individuals with different ideologies,” said Ali Kamel, a student at Ibno Zohr University in Agadir.

For Abdelali Zaynoun, a student journalist, the movement failed to gain the support of many Moroccans because of the vague backgrounds of its leaders. “Moroccans didn’t have any idea about the real organizers of the movement, neither their inclinations nor their political or intellectual interests,” he explained.

In the same vein, Marouan Dardour, a student at Agdal University and a waiter at a café in Rabat told Morocco World News, “I witnessed the events of 2011. People at the cafés were talking negatively about the movement.”

“We weren’t excited to join the streets because we heard that the 20 February was set up by atheists and homosexual figures, such as some members from the association ‘Kif Kif,’ which aims to legalize homosexuality in Morocco, and from ‘W Ana Mali,’ which calls for the protection of atheists in Morocco,” he explained.

Dounia Atif, a Master’s student at Mohamed V University in Rabat told MWN that demonstrations and protests should have come from inside Morocco to struggle for the internal issues. “The movement was managed by figures living abroad. Thus, any movement organized from abroad would end in failure, because Moroccans are more patriotic than their expatriates,” she explained.

MWN tried to contact Mohammed Sokrat, one of the Movement’s founders, who was jailed. He refused to reply.

However, we were able to contact Mehdi Hehi, another founder from Guelmim in southern Morocco.

In his response on the opinions of the citizens, Hehi stressed that the 20 February Movement wasn’t inspired from the Arab Spring. “20 February is a series of social movements, which are deeply rooted in the history of Morocco.”

Hehi said that the movement included figures with different backgrounds. “Thus, it was hard to coordinate with them and agree on specific demands. Meanwhile our aim was attracting Moroccans to the streets in order to express their demands themselves,” he explained.

In response to the accusation that the movement was managed from abroad, Hehi said, “that’s true, the Movement included Moroccans who spent their whole lives abroad. Most of them were radicals, such as Allouli from the US, who was against the monarchy.” He then added, “But those radicals were not the only founders of the movement. All Moroccans are the founders of the 20 February Movement,” he explained.

Hehi concluded that, “the accusations that 20 February was set up by atheists and homosexuals were due to the stereotype introduced by the media campaign. The campaign was carried out by State television and radio in order to deface the reputation of those young ambitious activists.”

Edited by Katrina Bushko
© Morocco World News. All Rights Reserved. This material may not be published, rewritten or redistributed