Fez- The Student Ambassadors for Peace club in Fez will organize a musical concert on Saturday, March 15, at 15h.30 in Alif Riad, Batha in Fez, to gather support for Syrian refugees residing in the city. 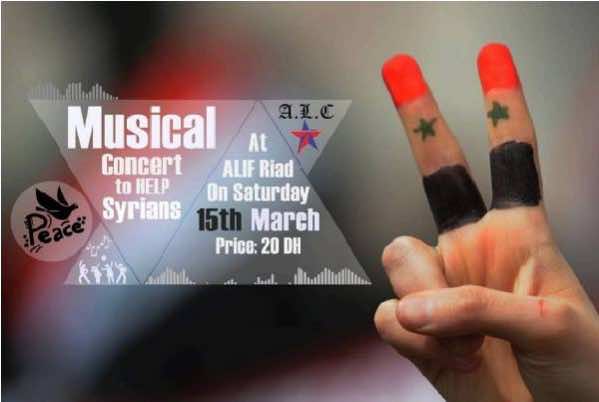 Fez- The Student Ambassadors for Peace club in Fez will organize a musical concert on Saturday, March 15, at 15h.30 in Alif Riad, Batha in Fez, to gather support for Syrian refugees residing in the city.

The main objective of the event is to cooperate with Syrian refugees to aid them in affording their basic needs in Fez and coping with the difficult circumstances and trauma of their situation.

Tickets are being sold for a symbolic MAD 20. Attendees will enjoy watching a musical group that is in the process of hitting the world stage while simultaneously helping their Syrian brothers and sisters to live and thrive in the city.

The event anticipates generating a large audience base, promising to disseminate public awareness of the dire conditions Syrians face in Fez.

“Because of the suffering and pain we feel in the eyes of Syrian families who, suddenly, found themselves homeless in Morocco, as result of the political crisis that crippled their home country, every day we see Syrians begging in order to survive,” reads a statement on the Student Ambassadors for Peace club’s Facebook Page.

“This why our students at the club Ambassadors for Peace of the city of Fez, with the partnership of the American Language Centre, have decided to organize a party in solidarity with Syrian with the view to raising a sum of money that would allow us to put a smile in their face” it added.