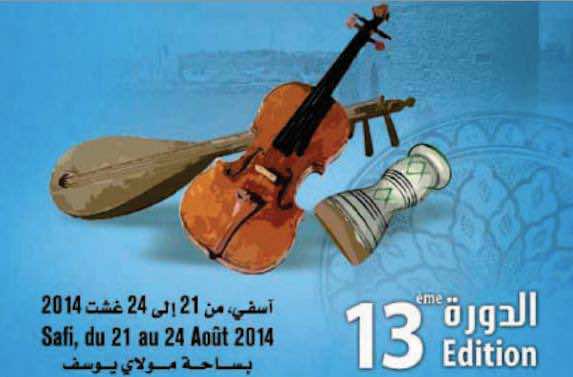 Fez – The Moroccan Ministry of Culture in cooperation with the Dokkala-Abda region as well as the support of both the regional and the municipal councils, is organizing the 13th session of the National Festival of L’Aita art, under the high patronage of King Mohammed VI on August 21-24 in the Moulay Youssef square in Safi.

Morocco is blessed by its diversity. Different sorts of music are performed and celebrated each year. No matter how ancient, the artistic impact of Moroccan music remains alive. Various festivals are organized regularly for the purpose of expressing Morocco’s cultural diversity and artistic heritage.

L‘Aita is one the ancient traditional arts in Morocco’s heritage repertoire. It is still performed and celebrated and its antiquity enhances the respect of Moroccan audiences. L’Aita consists of structured poems using the old form of Darija [Moroccan Colloquial Language] and contains wise proverbs. It was mainly used to reveal social and political problems. It appeared during the period of Sultans’ rule and prospered during the colonial period in Morocco. It covered political, economic and social aspects of crises. Some of its great leaders were Kharboucha, Fatna Bent Elhoussine, Salha and many others whom the current singers of L’Aita imitate.

The Ministry of Culture is in the works of launching the 13th edition of the festival and intends to present L’Aita art and analyze its content in depth by presenting special and diverse performances by approximately 20 bands.

Only the founders and the lovers of L’Aita can know what political significance and meaning it holds; establishing it as the most tasteful and evocative means of Moroccan self expression, especially by the old generation.

Not having today’s advanced music materials, “Chikha” or the head singer of the band entertains the audience with her pleasant voice accompanied by a range of musical instruments such as Moroccan tambourines (Bandir), the cello, flute and Gunbri to create soft and pleasant sounding music.

Under the theme of “the artistic and aesthetic references of L’Aita Art,” many well known figures, singers and researchers in the domain will attend the festival including the writer Bahrawi Hassan, the music scholar Ahmed Aydoun, the playwright and short stories writer Salem Akuinda and Abdulsalam Ghayour.

According to the Ministry of Culture, the festival aims to honor two main singers of L’Aita, with whom this art still achieves great creativity. One of them, Hafida El Hassnaoui, has performed with the Ben A’aguida band from Safi since 1974. Her artistic career benefited from the immense help of Fatna Bent El Houssine which enabled Hafida to lead one of the leading bands in L’Aita with the help of her husband.

Mohamed Oueld Soba, nicknamed “Aita Knight” or L’Aita leader will be awarded and honored as well. He began his career at the early age of 14. This gave him the opportunity to foster greater creativity in singing l’Aita. He began during the Moroccan Green March of 1975 where Oueld Soba inaugurated his artistic path, his first attempt. And now, with his imitation of different great singers such as Maestro Sheikh Emhemed Da’abagi and Fatna Bent El Houssine, he has completed over 50 albums.

The festival is expected to be beautifully presented with the attendance of different singers of L’Aita such as the Takadda, A’aguida and Ben Shrif bands as well as Ouled Boua’Azaoui among many other singers.