Austin - When I was preparing my research project for the Fulbright grant, I never thought that I would end up at the department of Middle Eastern Studies (MES). It just happened that the researchers whose work I was interested in belonged in that department. I have chosen to write about MES at the University of Texas at Austin because many of my fellow Moroccans, and Arabs at large, usually suspect that American policies in our region are made by experts in such departments. 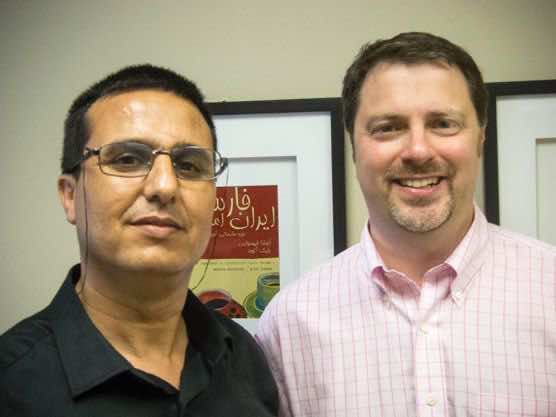 Austin – When I was preparing my research project for the Fulbright grant, I never thought that I would end up at the department of Middle Eastern Studies (MES). It just happened that the researchers whose work I was interested in belonged in that department. I have chosen to write about MES at the University of Texas at Austin because many of my fellow Moroccans, and Arabs at large, usually suspect that American policies in our region are made by experts in such departments.

In my attempt to learn about the history and the objectives of MES at UT, I was informed that the right person to address was Mr. Christopher Rose, who had served as Outreach Director at the Center for MES since 2000. Mr. Rose explained that the job of an outreach director was to manage the Center’s relations with other departments and with the community at large. The center does not only cater for the needs of its students who specialize in Arabic, Hebrew, Persian or Turkish, but also for students coming from other departments but study one of these languages. The outreach director also contacts professors in other departments whose expertise is related in one way or another to the Middle East. Dr. Karin G. Wilkins, who is the current director of the Center for MES, is an example of such professors; she is a professor with the Department of Radio-TV-Film, but much of her research was focused on Arab media. Concerning relations with the community, Mr. Rose mentioned, as an example, that the Center provided help for public schools and colleges that wanted to introduce Arabic in curricula.

Mr. Rose himself is very much acquainted with the Arab world. He studied for a year at the American University in Cairo as part of his BA program. He has also traveled extensively in Jordan, Morocco, Tunisia, Oman, Saudi Arabia, the West Bank, among other countries. Some of his interests as a historian include slavery in Medieval Arab Societies and diseases in Egypt and the Levant between 1850 and 1920. In brief, he is indeed the right person to feel my concerns and get the implications of my questions.

According to Mr. Rose, MES at UT started in 1960, in the middle of the Cold War. When Americans received the news that the Soviets had launched a Sputnik, they realized that the communists should be taken seriously. One way to do so was to establish good relations with peoples who were likely to become communists’ allies, namely those in the Middle East and Asia. For that purpose, the U.S government decided to fund the teaching of Middle Eastern and Asian languages to enable future diplomats, businessmen and others to communicate with people from those parts of the world. The late Winfred Lehmann, who was professor of linguistics at UT at that time, flew to Washington to get a share of funding, so that not all the money went to the prestigious universities like Harvard and Yale. It was then that the Centers for MES and Asian Studies were created at UT. MES at other American universities may have a different history. Over the years, the number of students who felt attracted by the languages and cultures of the Middle East must have gradually increased, but I was told by other sources that the sad events of 9/11 were behind the recent surge in interest in the study of Arabic and Islamic culture in particular.

What are the objectives of the Center for MES? Some Arab readers would think that the U.S is using its resources and competences to fight terrorism, and that people in departments of MES all over the country are also engaged in this global war. I addressed the question to Mr. Rose and he seemed to be already aware of Arabs’ suspicions. He recalled the time when he had been in Cairo and some people would ask him about the real purpose behind his study of Arabic or Egyptian history. They seemed to him to suspect that he was some sort of spy. According to Mr. Rose, the objectives of the Center for MES have not changed much since the Center was founded. The general purpose is to educate young Americans in the languages and the cultures of the peoples in the region. A brochure of the Arabic Flagship Program, for example, states that: “Typical profiles of our students include:

The next generation of Arabic language teachers

Engineers designing the future to meet our changing energy needs”

Thus, it is obvious that some learners of Arabic will end up with a career in intelligence, but public service is necessary in times of national crisis, and it is common at all times if the service pays well. According to Mr. Rose, the Center does not steer students in any direction. It has no contact with the government or other agencies to train students for special purposes. I asked him if any branch of the government had ever solicited expertise regarding a particular issue, and he pointed out that professors may be invited to express their opinions but they do so, not as representatives of the Department or the university, but as individuals mainly because of their contacts. He was quick to remind me that to suspect the academic background of the Center or the Department would be like accusing French departments in Moroccan universities of spying on France.

That seemed to me at first as an inappropriate comparison. In our universities, departments of foreign languages are usually accused of hosting alienated students and professors, and of encouraging Westernization (often taken to be synonymous with alienation or even treason). If the government could really interfere with academics, a number of research areas would not have been investigated. I could cite, for example, Amazigh linguistics, which was developed mainly in French and English departments. Similarly, Mr. Rose pointed out that many MES scholars voiced opinions that went against U.S politics in the Middle East at some point in time. Indeed, the relation between politics and academia is very complicated, and assuming that researchers will always act like civil servants for politicians is very simplistic, even in the name of the most sacred of national causes.

Next week, the experience of an eminent Arabist will be highlighted.

The Photo above shows Mr. Christopher Rose (on the right) and Dr. Ahmed Echcharfi (on the left)