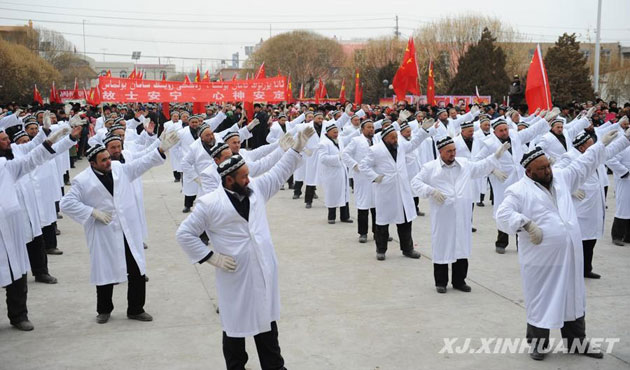 Rabat – In the Muslim majority district of Xinjiang on Monday, imams were forced by the Chinese state to dance in the street holding banners that read “our income comes from the CKP not from Allah,” according to World Bulletin.

The imams were also made to swear an oath that they would not teach religion to children on the grounds that prayer “is unhealthy and harmful to the soul.” Teachers in the district were forced to take a similar oath, also swearing to teach their students to stay away from mosques.

In addition to the banners, the imams were also made to chant statements exalting the state such as “peace of the country gives peace to the soul.”

This latest indignity comes after over half a decade of oppression by the Chinese state in the Xinjiang region, known by activists as East Turkestan, which has been autonomous since 1955 and is home to Uighur Muslims, a Turkish-speaking minority. Recently, China has increased its religious repression in the region, with human rights groups claiming that China has been using anti-terrorism as an excuse.

China has gone so far as to ban religious practices and icons, including clothing, in government buildings and to ban women in hijabs and burqas from using public transportation, as well as make it illegal for students and government officials to observe Ramadan.