Rabat- A pilot of Kuwait airlines is accused of entertaining a former British star and her friend inside the cockpit during a London- New York flight that dates back to 2013. 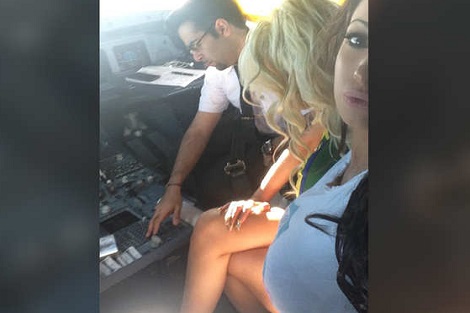 Rabat- A pilot of Kuwait airlines is accused of entertaining a former British star and her friend inside the cockpit during a London- New York flight that dates back to 2013.

Rumors of the pilot’s move emerged after UK X Factor star Chloe Mafia, also known as Chloe Khan, posted selfies of herself on Facebook inside the cockpit while she was pampered by the pilot.

The pictures prompted Kuwait’s authorities to open an investigation into the reports that the Kuwaiti pilot allowed Chloe Khan and her friend to enter the cockpit.

“If the reports and pictures are proven true, we will take action against the people involved and we will announce the conclusions to the people of Kuwait,” Issa Al Kandari, Kuwait’s communication Minister said according to the official Kuwaiti news agency.

“We were sitting in business class about 30 minutes after take-off. The seatbelt signs had just gone off and a stewardess came and said the pilot wanted us to go to the cockpit. They locked the door and the captain introduced himself and said ‘Hi, I’m the naughty pilot. He said he lets sexy girls in the cockpit, even though he’s not supposed to, because he ‘made the rules’. Then he told the stewardess to get us a bottle of champagne, which me and my friend drank” Chloe said.

“He started smoking, which I thought was odd, but he said he was the pilot and could do what he wanted. I asked if it was safe as I was worried and he just said people were ‘too fussy’ about safety. I was stunned.”

“Pilots did not drink any of the alcohol but the captain smoked 40 cigarettes throughout the journey, sang The Lion King’s Hakuna Matata and Toni Braxton’s Un-break My Heart. He was showing us what each of the buttons did and said we could sit on his knee and wear his pilot’s cap and fly the plane.The co-pilot didn’t smoke or really say that much – he made a couple of jokes but thankfully he seemed more concerned with flying the plane,” Chloe added.