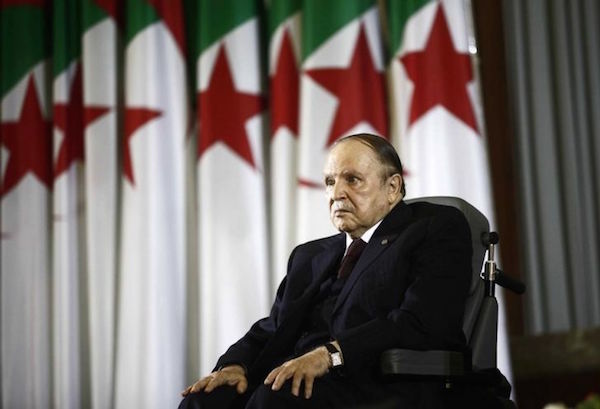 San Francisco – Imagine for a moment you are Algeria’s Bouteflika, waking up every morning to the news that oil prices are still taking a beating. They have plunged 65 percent in about a year, and during that same year, you were distributing out freebies to your cronies, keeping the masses calm by showering them with free housing, government jobs, and even loans that you know ahead of time that won’t be paid. It worked for a while: many Algerians thought that it was genius move from whom they like to refer to as the Rais (president).

It would have been genius if Algeria was an industrialized country with various sources of revenue. But as we all know, that is not the case. The oil and gas sector constitutes 98 percent of exports, 70 percent of government revenue, and employs only 2 percent of the labor force.

A year has gone by quickly, and Bouteflika is now asking those he pampered with gifts to tighten their belts and not to expect any more giveaways, and all the promises he made to them are called off.  It’s a not a rosy situation, nor one he wants to be in. Besides, he is facing several medical issues, is confined to a wheelchair, and makes frequent trips to France for doctor visits using medical plane paid for by the Algerian people, while the rest of the population can’t even find a decent hospital bed.

Bouteflika thinks he has the answer that will allow him to fulfill his wish: he’s continuously replacing those he promoted to top positions not long ago. He does not know who to trust anymore and he does not want any of his cronies to start feeling comfortable to the point where they start thinking about toppling him with a deal with the secret service and the ghostly military regime.

Bouteflika’s favorite weapon against the Algerian people is to basically blame everyone else: using his cronies and the corrupt media to misinform the Algerian people that the world is against them and is jealous of them; insinuating that the Gulf countries are working hard to weaken Algeria due to his friendship with the leaders of Syria and Iran and his unwillingness to support Saudi Arabia in their  fight against the Houthis.

Bouteflika even blamed the King of Morocco for the ethnic killing that took place in southern Algeria. Needless to say that Bouteflika’s policies have helped house, feed, and pay the salaries of the enemies of Morocco using the money that could be well spent on Algerians, who will soon be feeling the pinch of Bouteflika’s flawed decisions.

Many Algerians reading my posts often asked me in their comments to mind my own business, which I think is fair. I would do that the minute the Algerian regime does the same. You don’t see me writing about any other North African country, and I can assure you that Moroccans have nothing to be jealous of. Algerians need to understand that it is in Morocco’s interest that Algeria does well. We do not want another Libya or Mali bordering our country.

Algerians need to understand that their leaders are driving their country to a dangerous place. It is up to the Algerian people to wake up and start thinking that in times of terror an uncertainty, they cannot do it alone. ISIS and similar groups are mushrooming all over North Africa, and unless all of us in the Maghreb work together, the consequences will be dire. Let’s hope that the plunge in oil prices is a wake up call for Algeria to realize that we are better off as a group. Take it from the Europeans. Let Germany and France serve as a vivid example: if we put our heads and hearts together, better days can be ahead.