Taroudant - Nine Moroccan party leaders are reportedly preparing to visit Sweden, as part of their efforts to convince Sweden to give it on project to the Polisario’s self-proclaimed Saharawi Arab Democratic Republic (SADR). 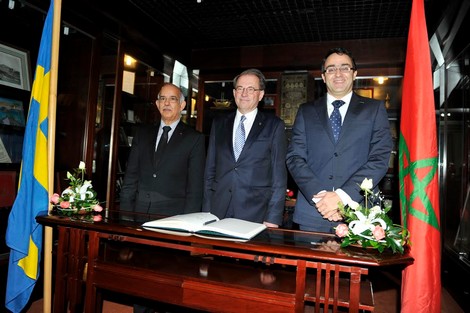 By
Larbi Arbaoui
-
Larbi is a freelance writer and assistant editor at Morocco World News.
Sep 29, 2015
Spread the love

Taroudant – Nine Moroccan party leaders are reportedly preparing to visit Sweden, as part of their efforts to convince Sweden to give it on project to the Polisario’s self-proclaimed Saharawi Arab Democratic Republic (SADR).

Abdel Ilah Benkirane, Morocco’s Head of Government, held a meeting on Monday in Rabat with the Moroccan political party leaders to discuss the Swedish move.

The political party leaders stressed on the need to intensify efforts through parallel diplomacy, and decided to pay a working visit to Sweden.

The Head of Government briefed the Moroccan political party leaders on the developments of the territorial dispute, stressing on the need for a national mobilization.

Benkirane said that his government will lead a large-scale campaign to put pressure on Sweden to renounce its decision, which he described as “irresponsible”.

Early this month, the Swedish Social Democratic Party submitted to the Swedish Parliament (Riksdag) a draft bill calling for granting a diplomatic status to the Polisario Front representation in Stockholm.

Stefan Löfven, Swedish Prime Minister, who said he is studying ways to find a peaceful and lasting solution to the Western Sahara conflict, highlighted his country’s position of “supporting the right of the Saharawi people in self-determination.”