New York - The headquarters of the Embassy of the Kingdom of Morocco in the Republic of Panama was inaugurated Tuesday in Panama City, in presence of Morocco’s Foreign Affairs Minister and several Moroccan officials. 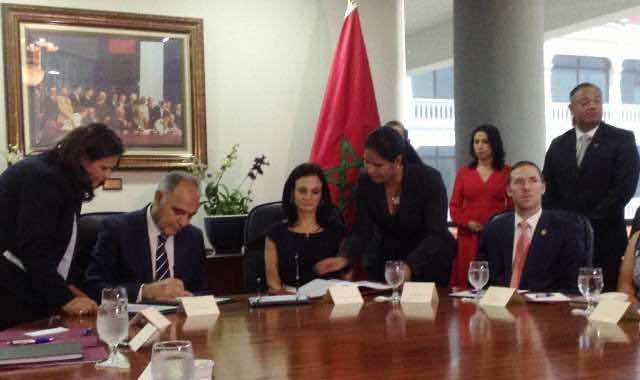 New York – The headquarters of the Embassy of the Kingdom of Morocco in the Republic of Panama was inaugurated Tuesday in Panama City, in presence of Morocco’s Foreign Affairs Minister and several Moroccan officials.

The opening ceremony of the Moroccan Embassy in Panama City was led by the Minister of Foreign Affairs and Cooperation Salaheddine Mezouar.

“[This is] a sign of confidence towards each other, and a message confirming Morocco’s determination to build a future-oriented partnership, able to ensure greater prosperity for both countries and both peoples,” Minister Mezouar said in regards to the newly-open diplomatic mission.

The Moroccan minister along with a delegation of Moroccan officials arrived in Panama City last Sunday to strengthen diplomatic relations and cooperation with Panama.

In April 2014, the Embassy of the Republic of Panama was opened in Rabat in presence of Panamanian and Moroccan officials and both countries’ diplomatic corps.

Moroccan Minister Delegate of Foreign Affairs and Cooperation, Mbarka Bouaida had said at the time the inauguration of the Panamanian Embassy in Rabat was a landmark in Moroccan-Panamanian relations.

She had also highlighted that the withdrawal by Panama of its recognition of the self-proclaimed Sahrawi Arab Democratic Republic (SADR) was part of the efforts of the Central American country to consolidate relations with its African partners.

Diplomatic relations between Panama and the self-proclaimed SADR were established in May 1979 and suspended in November 2013, five months before the opening of the Panamanian Embassy in Morocco.

However, on January 7, the International Relations Committee (IRC) of the Democratic Revolutionary Party (PRD) in Panama welcomed the resumption of diplomatic relations between Panama and the SADR, and the Embassy of the Saharawi Republic was re-opened in Panama.

On Wednesday, the Vice-President and Foreign Minister of Panama, Isabel de Saint Malo argued in a statement that the re-opening of the Embassy of the self-proclaimed SADR in Panama does not affect Moroccan-Panamanian relations.

“The lifting of the suspension [of relations between Panama and the SADR] is an isolated problem in our relationship with Morocco for which we demonstrated our willingness to strengthen it,” Minister de Saint Malo said after the inauguration of the Moroccan Embassy in Panama.