New York - Ban Ki-moon is not enjoying one of his best times as United Nations Secretary-General. 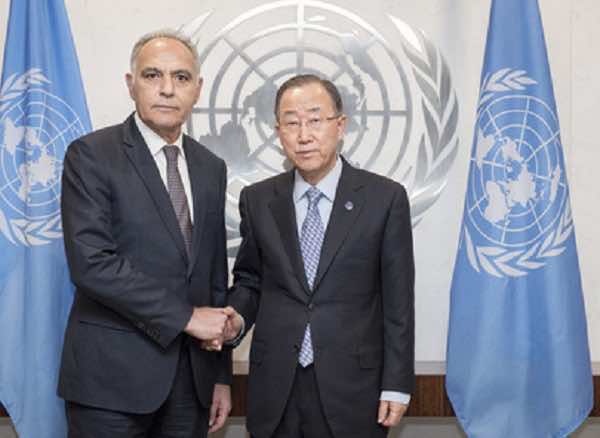 New York – Ban Ki-moon is not enjoying one of his best times as United Nations Secretary-General.

The month of March has only brought him strife, irritation, dissatisfaction and further tensions. Ban Ki-moon has revealed his anger and disappointment twice in less than five days. During a tense meeting with Morocco’s foreign minister, Salaheddine Mezouar on Monday, Ban Ki-moon expressed anger at the Moroccan people for staging a peaceful march to protest against his bias in favor of Algeria and the Polisario. On Friday, March 18, he expressed disappointment with the Security Council for not backing him against Morocco.

The UN chief may be blaming himself for not showing constraint and neutrality during his recent trip to the Tindouf camps in southern Algeria, and for underestimating Morocco’s reaction and overestimating the diplomatic backing he typically enjoys in several important capitals.

During the closed meeting it held on March 17 to discuss the latest developments regarding the Western Sahara, the United Nations Security Council did not show unanimous support for Ban Ki-moon in his personal feud against Morocco. The meeting was convened at the initiative of the President of the Council following the controversy the UN chief created after he deviated from neutrality and impartiality in leading his mediating efforts between Morocco and the Polisario and failed to show due consideration to a full-fledged member of the United Nations.

After the unprecedented statements he made in the Tindouf camps on March 5-7 when he showed his clear bias in favor of Algeria and the Polisario, the Secretary-General and his Personal Envoy might have been tempted to assume that they would receive the backing of the Security Council and, thus, impose their own political agenda.

However, their enthusiasm for the establishment of what would most likely be a failed independent state in the Western Sahara caused them to forget that whatever actions they might undertake to chart a new path and undermine Morocco’s position, the Security Council has the final word regarding the maintenance of international peace and security. The 15-nation body is also responsible forin setting the framework that the UN secretariat should abide by in order to carry out its mission to the fullest and help the parties involved in the conflict to reach an agreed upon and mutually acceptable political solution in line with relevant Security Council resolutions adopted since 2007.

The Security Council’s inability to support Ban Ki-moon, or at least issue a press statement, is a painful blow to Ban Ki-moon and sets a new precedent for the UN. Traditionally in similar cases the Security Council provides support for the Secretary-General and his envoys, especially if they are committed to the scope of the mandate entrusted to them by the Council in line with the Charter of the United Nations. In similar situations, the Security Council has passed a resolution condemning the nation involved in a confrontation with the United Nations or issued a presidential statement calling on the parties to show restraint and avoid escalation.

Thus, by not condemning Morocco or urging it to reverse its decision to reduce the presence of MINURSO in Western Sahara, the most important UN body implicitly admitted that the ongoing row is between Morocco and Ban Ki-moon and not between Rabat and the United Nations. The Council’s lack of support for Ban Ki-moon also indicates that its members are not satisfied with the undiplomatic way in which he has dealt with the situation and with his disregard for his mandate, which requires that he show neutrality and non-alignment with any party in the conflict.

The division that emerged between countries that have requested that the Council call on Morocco to review its decision to reduce MINURSO’s presence in the territory and countries that acknowledged implicitly that the existing tension is between Morocco and the Secretary-General personally, shows clearly that there is no consensus among member states about Ban Ki-moon’s initiative to set the political process back where it was a decade ago through the marginalization of the Moroccan plan for autonomy. It also indicates that there is no consensus about the approach to be adopted to bring the negotiations between Morocco and the Polisario out of eight years of deadlock.

Moreover, the division among member states suggests that the efforts of the Secretary-General to isolate Morocco and weaken it before members of the Security Council ahead of its discussions of the conflict this April stand no chance of success, especially in light of France’s traditional support for Morocco and the support it will most likely receive from Spain, Japan, Egypt and Senegal, and probably Russia and the United States.

If we add these countries’ support to the statement expressed by Russia earlier this week when it rejected any change in the parameters of negotiations established by Security Council Resolution 1754, it can be argued that the Secretary-General might face an uphill battle to impose his personal vision and political agenda on Morocco. He will also have difficulties persuading members of the Security Council of the need to change its approach and abandon once and for all the political framework established by the aforementioned resolution.

Need that US moves beyond its ambiguous position

On the other hand, if there is one lesson to be learned from this ongoing tension, it is that Morocco should look beyond the ambiguous position of the United States. While there is reason to celebrate the statement made by the US mission to the United Nations today to renew its position that Moroccan autonomy plan could provide the basis of an agreed upon political solution, this statement brings nothing new to the table. In fact, it only echoes the same statements made in recent years by US officials in their meetings with their Moroccan counterparts. These statements fall short of expressing clear support for the Moroccan autonomy plan as the only clear option likely to bring an end to the conflict.

The statement is perhaps intended to rectify the position the US adopted on March 17 during the Security Council meeting when it showed no enthusiasm for supporting Morocco in its dispute with the UN chief.

Through its position during Thursday’s meeting, Washington has shown that Morocco, its interests and the preservation of its territorial integrity are not priorities of the current US administration. The ongoing crisis has revealed that the statements made in recent years by US officials that their country continues to “consider as serious, realistic and credible the autonomy proposal made by Morocco to settle the dispute” are just a smoke screen that has not translated into clear support for Morocco in its arms-wrestling with Ban Ki-moon.

The most important occasions for strategic allies to fulfill their commitments to their partners are times of crises, such as the dispute between Morocco and the UN chief. In this regard, if the US administration had the willingness to provide moral and political support to Morocco, it would have aligned itself with France, Spain, Japan, Egypt and Senegal, which have all expressed their clear support for the Moroccan position.

There is no doubt that the next few weeks will bring further developments in the conflict and that the Secretary-General and his Personal Envoy will seek to submit a negative report on Morocco. Ban and his personal envoy will most likely accuse Rabat of obstructing negotiations and urge members of the Security Council to adopt a new approach to put an end to the conflict.

This highlights the pressing need for Moroccan diplomacy to intensify its tireless efforts to prevent the Security Council from changing the framework for negotiations that it has set in 2007. However, Ban Ki-moon’s failure to enlist the support of all the members of the Council and convince them to condemn Morocco, suggests that the road ahead will be tough for him if he seeks to achieve his personal political agenda and meet the aspirations of Algeria and its allies.

Ban Ki-moon’s personal clash with Morocco as well as his failure to handle the situation in a diplomatic manner and prevent its escalation will add to his long list of failures in managing more pressing conflicts on the United Nations agenda during his tenure, especially the question of Palestine, Syria, Iraq, Yemen, Libya, the Muslim minority in Myanmar, Mali, and others.

Unfortunately for the billions of people who had hope that the highest representative of the United Nations would rise up to the challenge and make the world a better place, Ban Ki-moon was unable to solve any of the major crises he was entrusted with. The best he was able to do throughout his two terms was to merely express his concern about every situation that arose to the point that observers and experts know the content of the statements he will make even before they are released.