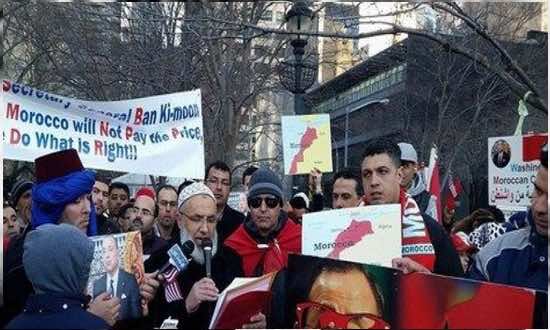 Many protesters travelled to the northern state from different areas of the country – namely, Connecticut, Florida, Georgia, and Texas – to participate in the event, though a majority of the participants were from one of the five boroughs of New York.

Several protesters were interviewed for a Youtube video posted by user Mohamed Ourais; “the Sahara is Moroccan and will stay Moroccan,” they said.

In addition, a group of six Canadians of Moroccan descent came to New York to vocalize their opposition to the U.N. leader’s comments, which have mobilized the Moroccan government to end MINURSO’s presence in the Sahara region.

The first protesters arrived at the site prior to the scheduled start of the demonstration and held signs condemning Ki-moon’s statement, which they believed lacked “neutrality.”

Among others, one sign read, “Ban Ki-moon’s job is to unite people, not to divide people.”

The protest’s coordinating committee told Hespress that the event brought together members of the Moroccan-American community from all of the states in the union for the first time in order to defend the territorial integrity of their homeland. According to the committee, many members of the community consider acceptance of the kingdom’s stance on the Sahara issue a “red line” that cannot be transgressed by any supporter of Morocco.

The committee added that individual Moroccans who donated funds to provide transportation for demonstrators played a key role in ensuring a big turnout for the protest and making the event a success.

“This is just the beginning,” said one organizer. “We intend to organize another protest  in defense of the unity of Moroccan soil.“