Morocco ranked as high as 74th on this list of 163 nations. As an initiative of the KidsRights Foundation, KidsRightsIndex cooperates with Erasmus University in Rotterdam. Its list includes a ranking for all 163 UN member states which have ratified the UN Convention on the Rights of the Child. This notably excludes the United States, the only country to have not ratified this treaty.

Children’s rights are measured in five categories including the rights to life, health, education, protection, and an enabling environment for child rights. Data was gathered from two reputable United Nations bureaucracies: UNICEF’s quantitative State of the World’s Children report and the qualitative UN Committee on the Rights of the Child.

Norway took the list’s top spot, with nine of the top ten nations being European states. Tunisia, number ten, was the single non-European nation on that list. The list calls special attention to Thailand and Malaysia, ranked 21st and 26th respectively, for doing “exceptionally well for cultivating an enabling environment for child rights.”

Morocco was one of 13 nations that was observed by the Committee on the Rights of the Child in 2014, and whose data was recently sent to KidsRightsIndex. The kingdom’s ranking has thus been reevaluated.

Certain rankings on the list are particularly surprising, such as Jamaica’s rank of 51. This puts it ahead of several richer, industrial, technologically advanced nations. The report itself acknowledges that “richer does not necessarily mean better” on its score, which explains why Italy (81), Canada (72) and the Republic of Korea (69) have lower rankings than nations like Jamaica. Given the state of Jamaica’s economy and education system, the NGO’s 23 indicators of children’s development seem to take into account more than surface-level notions of progress.

Nevertheless, Morocco’s improvement from 88 in 2015 to 74 today is noteworthy and represents the kind of progress that the kingdom aspires to achieve. 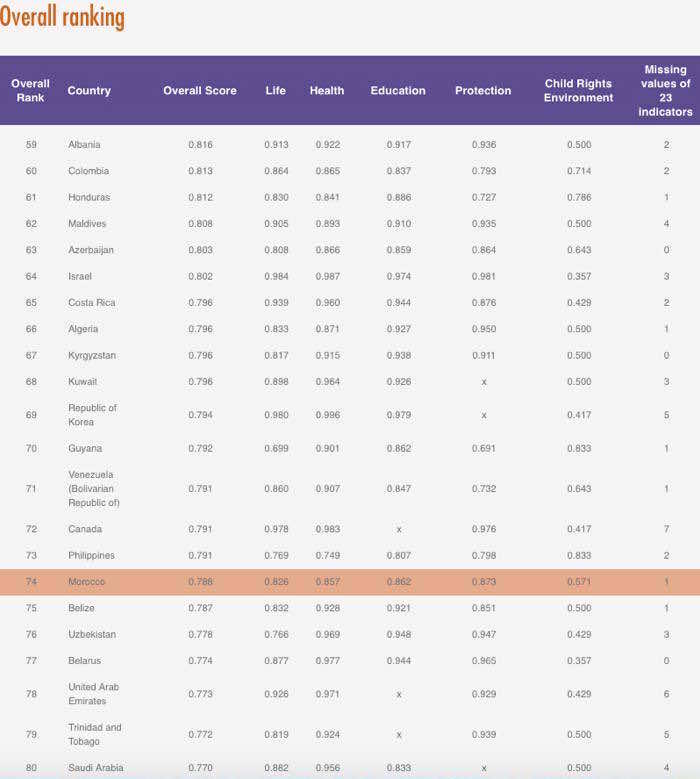