Rabat - A weekend in Fez is enough to understand the timeless appeal of the thousand-year-old medina, but certainly far too short a time to unveil all of its secrets.

Rabat – A weekend in Fez is enough to understand the timeless appeal of the thousand-year-old medina, but certainly far too short a time to unveil all of its secrets.

I traveled with two other journalists and a local to capture the atmosphere of the mid-Atlas city, delving into every-day life over tourist attractions. The depth of history in the medieval Moroccan capital pervades to modern times, granting a rare insight into traditional life with minimal modern influence.

A photographer, a videographer, our guide, and I stayed at a house in suburban Fez, well outside the walled city limits. Suburban Fez often lies beyond discussions of Fez, but represents a modernization which eludes urban life. The homes blend Western architecture with Moroccan styles, wrapped together in contemporary technology. Large developments continue to spring up, giving a third dimension to the old city/new city binary.

We woke up late, as is custom during Ramadan. A morning rise would find empty streets, but an early afternoon excursion would find a waking city. Just after 1pm, we rode a taxi into urban Fez. The new city’s French influence was apparent in the wide streets and flowing fountains, but we continued onwards to our real destination: the old medina. Our first stop, by the river, was the leather factory. This traditional tannery uses vats of natural dyes to color its leather, spanning all across an enclosed compound. Men wade through troughs of colored liquid, dunking their goat or cow hide into the vats, and letting the sun bake the color into the material. The workers seemed immune to the potent stench, but they gave us mint leaves to mask the smell.

However, we were denied the ability to take photos or video without official permission. This hurdle is common in Morocco and reflects the dense governing bureaucracies. Still, the city was large and full of intriguing sites not contingent upon government permission. Within minutes, a passing merchant called us over to observe his shop instead.

We entered his Argan co-op, where our photos were encouraged. As my colleagues snapped some shots, I sat beside a lightly veiled woman grinding Argan nuts with a small millstone, called “rrha” in Moroccan Arabic, and the vendor explained his trade. Traditional Berber herbalism and global pharmaceutical knowledge combined to make oils, scents, spices, and soaps. They explained that they collect the nuts of Argan trees, and extract the “heart of the nut.” This heart is then ground by hand into oil, as I saw before me with the woman’s tireless work on the stone rrha. 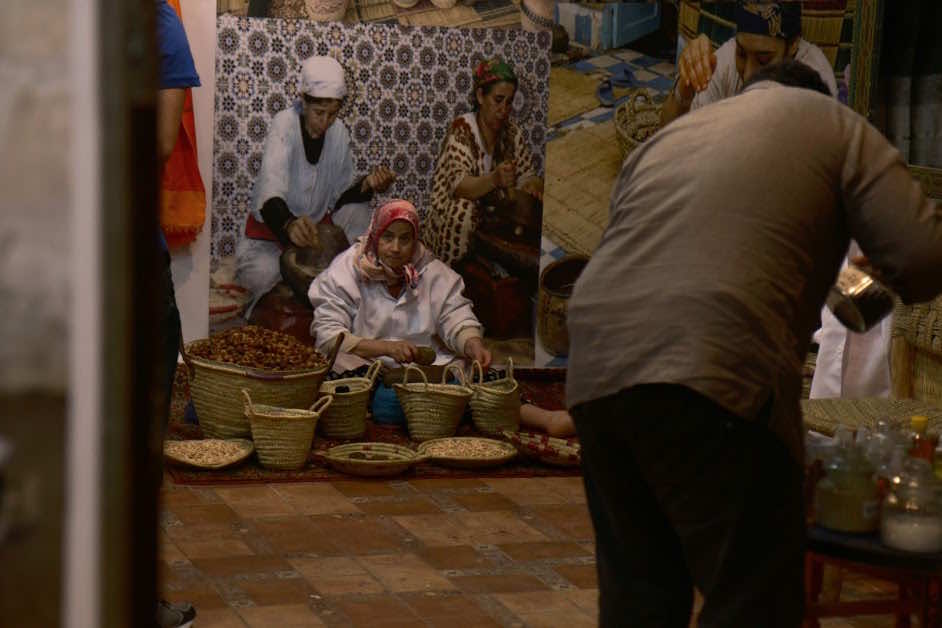 Argan oil comes in two varieties, the man explained: cosmetic and ailment. Cosmetic, for the hair or skin, gives off no smell. Ailment is produced with fire, and has healing properties. He proudly announced that the Argan tree grows only in Morocco.

Later that afternoon we navigated the bustling streets of the marketplace. The winding cobblestone roads of the old city were far too narrow for any car, and the main boulevard itself was indistinguishable from surrounding alleyways, apart from its length. Vendors called out to passersby, boasting of good prices and high quality products. Even cake and juice shops were open, searching for non-Muslim tourists as customers. As we shouldered through the dense crowds and skirted by a procession of European visitors, we came across a small building in the street wall. It had a low door and several wooden windows. Our guide ushered us inside. This was a school for young children, he explained, exactly like the ones which had educated him in his childhood. Some were hundreds of years old and renovated to avoid collapse, but never modernized.

I ducked inside the low door to a classroom full of young students, some attentive, some tired. Despite the grey stone and faded wooden beams, the room was colorful with stickers and decorations. Beneath a picture of King Mohammad VI sat a row of stuffed animals. The students were helping one another with their workbooks in an enthusiastic and collaborative environment, except for one boy subtly sleeping in the corner.

On the wall hung a simple clock. I glanced at my watch, and noticed that our times were different by an hour. This discrepancy was no accident; Morocco sets the standard time back one hour during Ramadan to let the sun set earlier, and allow hungry Muslims to eat their Iftar sooner. Fez, however, runs on its own time. Just as its old medina does not allow modern cars to enter its streets, the old city does not allow modern time adjustments to bother its daily routine. 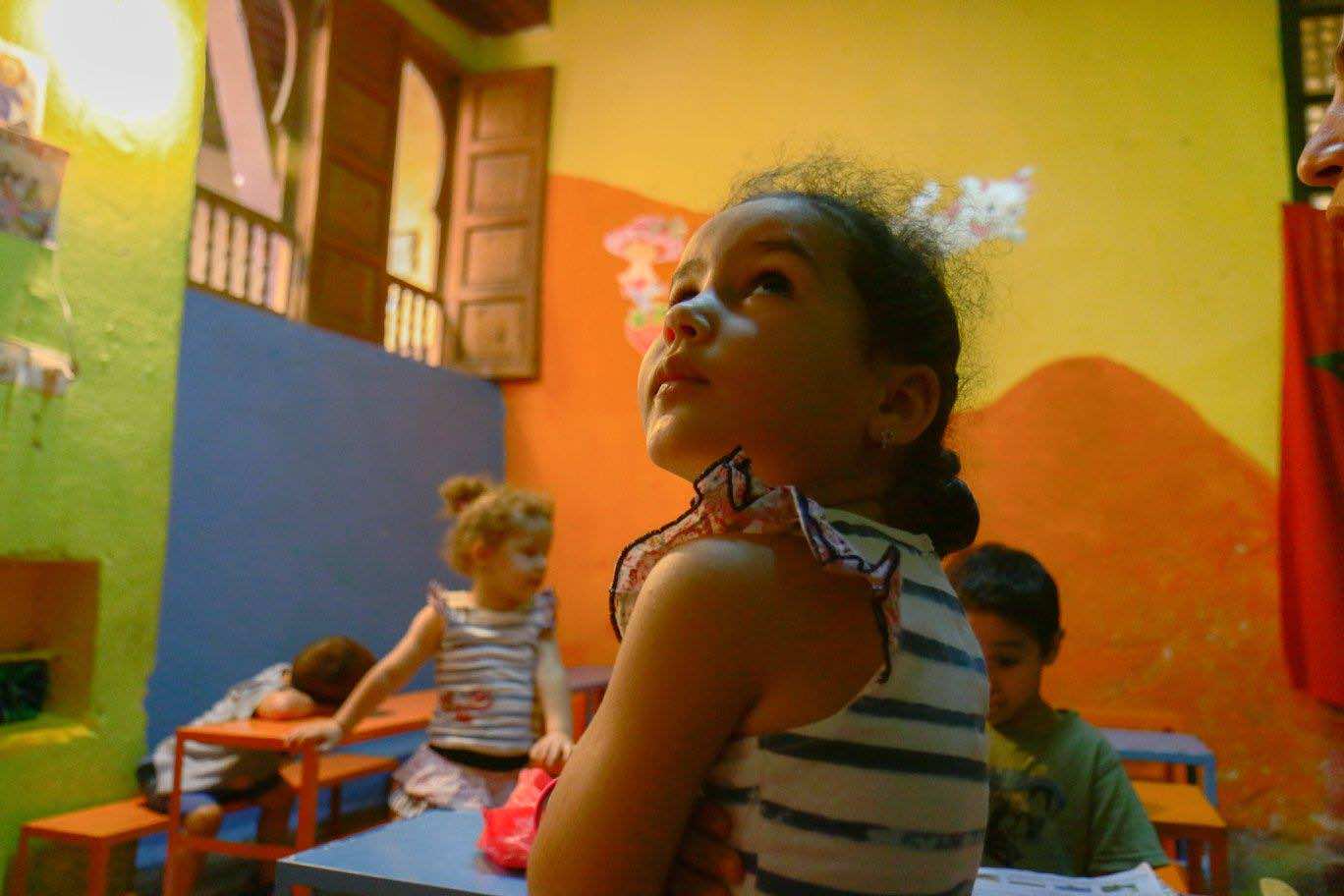 Our guide spoke with the teacher, and then told us that each student paid one Dirham a day for class. This meager sum of money was mostly symbolic, giving the families a stake in the system and their education a concrete sense of value.

We returned to the streets, which were as busy as before. This time, lively colors barraged our senses in the clothing section. Slippers of all shades, but mostly a bold yellow, stood in stalls or balanced in precarious stacks as vendors dashed from store to store. Flowing jalabas and elegant kaftans draped across iron doors, hiding the rusting metal with vibrant cloth patterns. Our guide informed us that these iron doors all across the city were being replaced with hand-carved wooden ones, in a government effort to both beautify the city and pay homage to its historical roots.

Beyond the clothing alleys, and through another labyrinth of roads, lay Saffarine Square. Here, the metalworkers hammered their pots, fixtures, and furniture in a strangely appealing dissonance of drum-beats. Oblivious to the world around them, they composed their strange harmony with unintentional instruments. The great and ancient tree which locals call Tout stood tall in the center of the square, as it had for generations.

Although I attempted to blend in with the locals, I was still clearly a foreigner. I was accordingly accosted with shouts for good prices. Among the usual promises of “Student price, no tourist price!” I heard one optimistic vendor offer me a “democratic price.” I was unsure of how this compared to the apparently alternative autocratic price, and so I carried onwards.

The last stop along our city voyage was a riad. Youness, the manager, offered us tea and cookies, despite his own fast. We sat down and listened to the story of this riad. Riad Attajalli was among the oldest in Fez, belonging to the chief record-keeper of the royal Alaoui family. While the family has since left, their magnificent riad was converted into a bed-and-breakfast style hotel, like so many others. Youness detailed the strenuous renovation processes, lamenting the difficulty of finding the right craftsmen to repair or replace antique decorations. Almost everything has been, to date, replaced or renewed, emulating the old style.

Their respect for the historical building was apparent in the care they took to match its former decorative details. A fountain inlaid into the wall dominated the central room. Its circle-patterned mosaic tiles formed intricate designs in the classic brown, blue, and white hues. From carved plasterwork to intricate cedar beams, the ancient structure seemed to live again.

Youness described his job as manager in the five-room riad. He enjoyed international guests, and found Americans and Australians particularly frequent patrons. While tourism has dipped in recent years due crime, false street guides, and the run-down state of the city, he was confident that high visiting rates would soon return. The sheer size of the medina, the beauty of the mosques, and the bustling allure of the souqs would bring them back.

He, like our guide, enjoyed showing off his city to foreigners. Cultural pride and a predisposition for hospitality drew me into the city, and gave me an appreciation for its ageless character. Observing daily street life drove home the dedication to heritage and traditional practice of the old capital’s inhabitants. Among some of the world’s most beautiful and well-restored sites, it was the people themselves that preserved the character of Fez.