Tetouan – Art lovers over the world enthusiastically agree that the creative aesthetic of the Hassan II Mosque embodies the peak of Islamic sacred art.

Because of its perfect combination of modern and ancient Islamic artistic traditions, the Hassan II Mosque is an elegant expression of Islam’s spirituality and a magnificent example of Moroccan architecture.

The Moroccan Islamic art tradition exhibited in this mosque reflects various architectural styles in vogue at various points of Morocco’s history.  The style is a synthesis of Berber, Mediterranean, Eastern, African and Andalusian contributions. The combination, however, does not mean that the level of influence that these different styles had on the work was extreme and unrestrained; the Moroccan architects, artists and craftsmen were always guided by Islamic spirituality that bans images and icons of human figures.

The mosque,  which was completed in 1993, is a large complex of nine hectares.  Its fine and detailed artistry is the result of 35,000 workers and craftsmen working over 50 million hours. Nineteen cranes were installed in order to erect the building, which houses a prayer hall, minaret and madrassa. This holy site can house nearly 100,000 worshipers. Its esplanade alone can accommodate 80,000 devotees. The far-reaching echo of its mouzzin’s call for prayer is heard across Casablanca. The minaret also flashes a laser visible 30 km distance at sea. Also, since the roots of its pillars are ceaselessly beaten by the waves of the Atlantic Ocean, it required the construction of an 800 m long pier.

The mosque draws inspiration from other mosques of the Islamic tradition. The mosque prayer hall is a replica of the Merenid Madrassa, and its tall spire is a copy of both the majestic Hassan Tower and the Koutoubiya Minaret. The green roof is a reproduction of the Qarawiyyine University of Fez. On the inside, the Hassan II Mosque features embellishments that employ arabesques and polygonal constructions of stucco and mosaic. The interior spaces feature ornaments of foiled arches and floral patterns of painted and engraved wood.

MINARET: Soaring nearly 200 m, the minaret is topped by a sky-light and a metallic cover made of shining copper called jamour. Because of its exceptional height, sophisticated technology and modern construction techniques were used to erect the minaret. This is marked in the reinforced concrete (béton armé), which is able to resist against the combined effects of the wind and earthquakes.

PRAYER HALL:  The prayer hall can hold over 25,000 people.  Its rectangular plan is supported by 78 pillars and is 200 meters long, 100 meters wide and 60 meters high. It has three naves perpendicular to the qibla wall. The central nave is larger and higher than the rest. The roof of the prayer hall undulates with a succession of varied domes, where suspended glass and chandeliers-imported from Italy- light the hall.

ROOF: The 3,400 square meter roof is movable and is capped with emerald green tiles. In Islam, green denotes goodness and spiritual plenitude. Once this mobile roof is opened, it changes the central part of the prayer hall in a magnificent, sun-bathed courtyard.

MADRASSA: The madrassa, a building that houses theological and other modern classes for pupils, covers 4,840 square meter and includes a basement and two stories. It is built back onto the qibla wall.  The madrassa includes a library, a museum and multi-purpose rooms for seminars, colloquia and conferences. These rooms are all equipped with sophisticated audiovisual equipment.

After 7 years of sustained work, the Hassan II Mosque was inaugurated by His Majesty King Hassan II and other African leaders on August 30, 1993, the 11th Rabi II, 1414 in the Islamic calendar. That day coincided with the eve of the Prophet Mohammad’s birthday.  On that memorable day, all Muslims are in a festive mood and frequent holy shrines to read out psalms and praise the Almighty God.

The location of the mosque is strategic. Erected at the western tip of the Islamic World, opposite the setting sun, the fog and the swell of the open sea, the building is at the uttermost end of Islamic lands – a religion that was born in the Orient and whose extreme west is Morocco. It was near that gigantic memorial that Oqba Ibn Nafi, the propagator of the Islamic faith, gave a historical discourse to his fellows, after realising that the Atlantic Ocean had been a natural barrier against the continuation of his preaching campaign 14 centuries ago.

The Hassan II Mosque is an emblem of an entire nation. It symbolizes solidarity, commitment, creativity and spiritual devotion of the Moroccan people. It constitutes, without doubt, a fundamental element of Morocco’s national heritage. As a result, it is world-renown as a stunning example of Islamic sacred art. 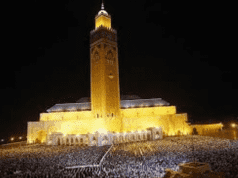 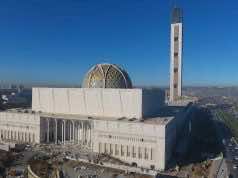 The Biggest Mosque in Africa is Now in Algeria, Not Morocco 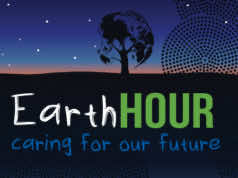 Morocco Switches Off Lights for Earth Hour on Saturday 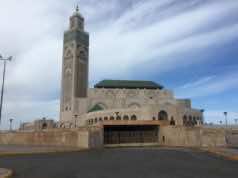