Rabat - The Royal Moroccan Football Federation (FRMF) has yesterday announced its intention to hold the Throne Cup Finals in Laayoune.

Rabat – The Royal Moroccan Football Federation (FRMF) has yesterday announced its intention to hold the Throne Cup Finals in Laayoune.

Plans are underway to have the finals at that Sheikh Mohamed Laghdaf Stadium in the City of Laayoune on Morocco’s Independence Day on Friday, November 18.

The announcement was made on the Federation’s Arabic-language website.

The Cup Final will be the first held in  Laayoune, whose team, Jeunesse Sportive d’El Massira, plays in the second division of the Moroccan soccer league.

The league is still in the quarterfinals phase, which will be played  on September 27 and October 2.

Having the Throne Cup finals is an affirmation of Morocco’s sovereignty over Western Sahara territory.

It was only two days ago that FRMF President, Faouzi Lakjaâa, met with FIFA President Gianni Infantino in Zurich.  Infantino praised the efforts of the Moroccan Football Federation in promoting football at the national level.

“The kingdom is able to organize the biggest football events in the future,” said Infantino.

After the meeting, the FIFA president announced plans to visit Morocco in the coming weeks in order to “develop relations between FIFA and the FRMF a view to strengthen their cooperation,” reported HuffPost Maghreb.

Faouzi Lakjaâa said that the work of the Grand stadium of Tetouan will be completed by March 2018, while work on the stadium in Oujda will begin in early 2017. 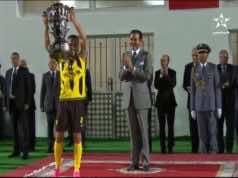