Washington DC - The Moroccan American Network’s Second International Media Forum opened on Tuesday September 27 at the historical National Press Club, one of the oldest bastions of freedom of speech in the United States. 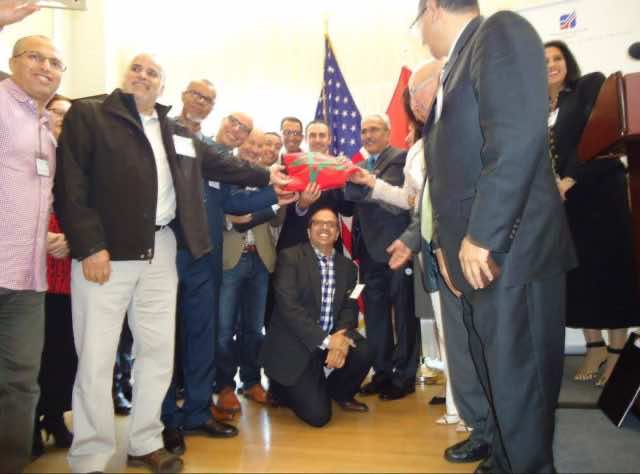 Washington DC – The Moroccan American Network’s Second International Media Forum opened on Tuesday September 27 at the historical National Press Club, one of the oldest bastions of freedom of speech in the United States.

Frequently the locus of international press events, and with journalist members around the globe, the Club displays a panoply of international flags in its main foyer. When MAN President Mohamed El Hajjam learned that there was no Moroccan flag, he decided to remedy that.

On Tuesday, the Moroccan American Network presented the Moroccan flag as a gift to the Club.  In a break in the intensive panel discussions, El Hajjam, along with journalist and forum speaker Mohamed Dourrachad, CEO of 50 Frames, and panel moderator Dr. Ali Ziyati, a professor at West Virginia State University, ceremonially handed the folded Moroccan red flag, with its green star facing outward, to NPC President Thomas Burr.

Burr, expressing his appreciation for the gift, said, “Morocco and the U.S. have had a longstanding relationship of mutual cooperation in many areas. I am pleased to see that relationship extended to the field of journalism. By flying the Moroccan flag here in this historical center of free speech, everyone who visits the Club will be able to appreciate Morocco’s efforts to broaden its protections of freedom of expression and safeguard the important work of journalists.” 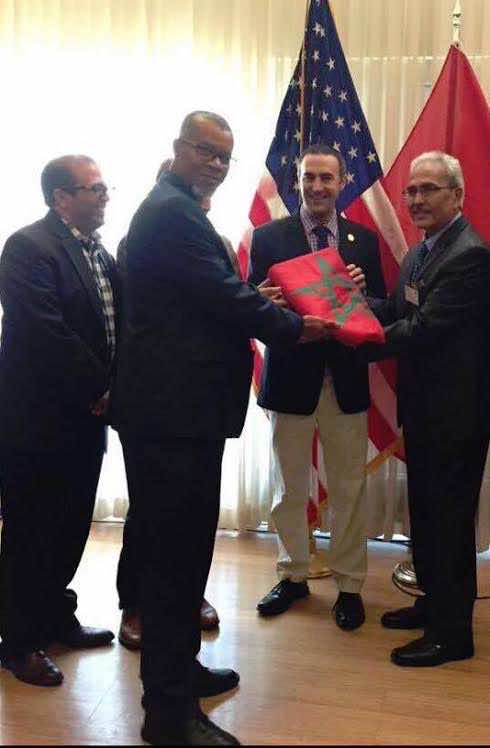 El Hajjam, a journalist by training, said, “I am very pleased that Morocco’s flag will now be on display alongside all the other flags at the Press Club. I am proud of Morocco’s advancements with respect to freedom of speech, as noted by a number of our Moroccan journalists who spoke at this year’s forum. Morocco can now take its place among the world’s countries with its commitment to truth and accuracy in journalism.”

Elisabeth Myers, a lawyer and law professor at the American University’s Washington College of Law and organizer of the forum, said, “In America, we believe in free speech. Since 1791, with the passage of the Bill of Rights, freedom of expression has been codified under the First Amendment of our U.S. Constitution.

Morocco’s new 2011 Constitution has similar guarantees for Moroccan citizens, and it is an important historical development that the flag of Morocco, the first country to recognize the independence of the United States of America, will now be flying at the National Press Club.  I am proud to have been a part of this achievement.”