Kigali - King Mohammed VI, accompanied by HH Prince Moulay Ismail, visited, on Thursday in Gisozi (Kigali suburbs), the memorial commemorating the victims of the Rwandan genocide which claimed the lives of one million people in 1994. 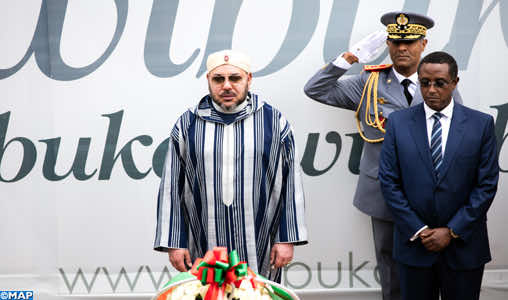 Kigali – King Mohammed VI, accompanied by HH Prince Moulay Ismail, visited, on Thursday in Gisozi (Kigali suburbs), the memorial commemorating the victims of the Rwandan genocide which claimed the lives of one million people in 1994.

The Moroccan monarch, who is paying an official visit to Rwanda, placed a spray of flowers on one of the common graves where the remains of millions of the genocide’s victims are buried, and observed a moment of silence for the deceased’s souls.

Inaugurated in April 2004, on the 10th anniversary of the Rwandan genocide, the Gisozi memorial includes three permanent exhibitions explaining the tragedy’s circumstances, reasons behind the growing tension between the country’s ethnic groups, what triggered the genocide and how it took place.

The memorial pays tribute to all the genocide’s victims and is a strong tool to raise the awareness of future generations.

At the end of the visit, the Memorial director Honoré Gatera handed the sovereign a brochure on the exhibition and a book entitled “28 years of survivors’ testimonies”. The King signed afterwards the Memorial’s book of visitors.