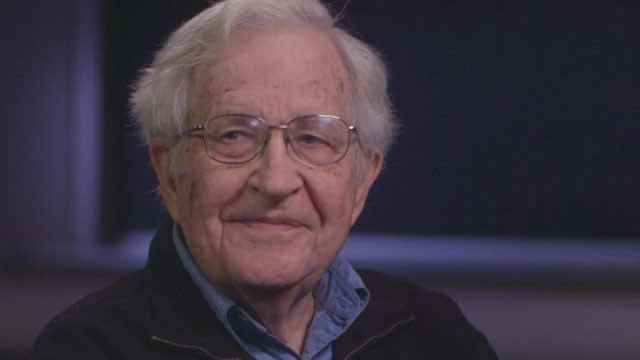 “There’s never been anything like [Trump],” the renowned US academic, award-winning author and public intellectual told UpFront host Mehdi Hasan. “In fact, the most predictable aspect of Trump is unpredictability. I think it’s dangerous. Very dangerous… It’s certainly extremely hazardous to have an ignorant, thin-skinned megalomaniac who sends off, you know, [tweets] at 3 AM if somebody angered him.”

Asked about an interview in 2010 where he had warned that “frustration and justified anger” in the US could lead the country down a road similar to pre-war Germany, Chomsky said: “I wouldn’t compare it with Germany,” adding “Hitler was a sincere, dedicated ideologue. Trump isn’t. He has no known ideology other than ‘me.’”

“He has no background at all in any political activities. Never held office, been interested in office,” he added. “He’s basically a showman,” a “…strange background for a president.”

On the subject of the media’s coverage of the election and Trump, Chomsky said, “The real treachery of the media in this election was to avoid issues totally.”

Chomsky was also asked about those who voted for third party candidates Jill Stein and Gary Johnston instead of voting for Hillary Clinton. “I think they’re making a bad mistake,” he said. “Do you vote against the greater evil if you don’t happen to like the other candidate? The answer to that is yes,” he added. “If you have any moral understanding, you want to keep the greater evil out.”

When asked about Trump’s position on climate change, Chomsky called it a “radical setback… Trump’s position is more fossil fuels, eliminate regulations, even coal, refuse the payments, promised payments to countries trying to move to sustainable energy. To claim that this is the same as Clinton’s programs is just madness in my view.”

Some on the left, like Slavoj Zizek, had claimed Trump’s election victory would shake up the system and benefit the political left in the U.S. Responding to that claim, Chomsky said, “It was the same point that people like him said about Hitler in the early 30’s… He’ll shake up the system in bad ways. That’s completely regressive.”

One positive aspect of Trump’s administration, Chomsky said, could be easing tensions with Russia. “Anything that would reduce the growing and dangerous and severe threat of nuclear war is to be welcomed,” he said. “It would be a nice thing if humanity could survive.”

Regarding claims by the U.S. government that Russia interfered in the elections through hacking, Chomsky said, “It’s possible, but it’s a kind of strange complaint in the United States. The U.S. has been interfering with, and undermining, elections all over the world for decades and is proud of it.”