By
Ghita Benslimane
-
Ghita is a Moroccan native and a graduate of Boston University’s Film and Television program.
Dec 22, 2016
Spread the love

Normally, Romania’s president would simply pick the leader of the largest party. This year, however, SDP leader Liviu Dragnea was not considered for the PM role given his April conviction for electoral fraud, for which he was handed a two-year suspended sentence.

As a result, the Social Democratic Party has nominated, in a surprising and historic decision, Sevil Shhaideh, a 52-year-old Muslim woman who, moreover, is part of the small Turkish community of Tatars in Romania.

“It’s a surprising choice,” political science professor Sergiu Miscoiu tells the NY Times. “People were expecting somebody controlled by Dragnet, but from the party’s upper levels, not a relative newcomer.”

“Picking Shhaideh suggests that Dragnea will control the government without taking direct responsibility. She is not stained in a direct way, so Iohannis has no official reason to reject her,” Miscoiu continues.

In talking about the nomination, Dragnea confirms what Miscoiu and many others are thinking. “If appointed, she would be prime minister, but the political responsibility stays with me first of all,” Dragnea said on Wednesday following the announcement.

Currently, only a few European countries have female leaders. With Theresa May’s appointment to PM in Great Britain last July, she became the 28th European female head of government. 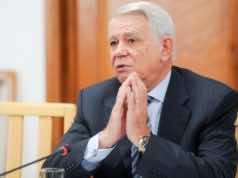