Rabat - A MAD 467 million loan from the Japan International Cooperation Agency will allow for the construction of an oceanographic and fisheries research vessel in Morocco, according to Maghreb Arab Press (MAP). 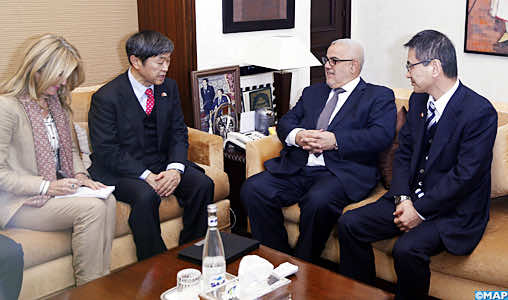 Rabat – A MAD 467 million loan from the Japan International Cooperation Agency will allow for the construction of an oceanographic and fisheries research vessel in Morocco, according to Maghreb Arab Press (MAP).

Economy and Finance Minister Mohamed Boussaid signed the agreement in Rabat on Monday, with Abdelmalek Faraj, the Director General of the National Institute for Inland Fisheries Research (INRH), on his side.

The vessel will allow for discoveries regarding the sustainable exploitation of Morocco’s maritime resources – namely, consumable fish.

“This vessel will contribute to strengthening scientific research and development of fisheries resources and will have significant economic and social benefits,” Shinichi Kitaoka, the president of JICA, said.

“Cooperation with Japan, particularly with JICA, has contributed greatly to the development and capacity building of INRH,” Faraj said.

The research vessel project is part of Morocco’s Blue Belt Initiative, launched during the 22nd Conference of the Parties to the United Nations Framework Convention on Climate Change (COP22). It aims to protect the oceans and ensure the sustainable development of the fisheries and aquaculture sector by strengthening ocean and marine ecosystem monitoring technology.

Kitaoka will complete a two-day visit to Morocco on the 17th of January.

Cooperation between Morocco and Japan dates back some sixty years, a statement by JICA released today, said, noting that the North African nation has benefited from the implementation of various projects valued at MAD 3.19 billion, concessional loans worth MAD 26.37 billion and non-repayable financial assistance totaling MAD 3.15 billion.