Rabat - The feud between Uber and Casablanca cabbies is taking a dark turn as more and more Uber drivers are getting attacked by local taxis. 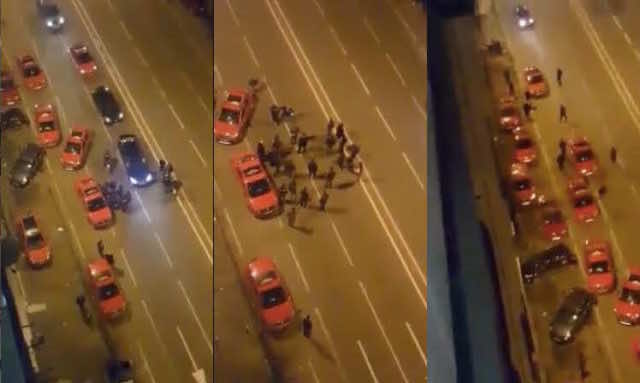 By
Chaima Lahsini
-
Chaima Lahsini is freelance journalist and activist with the Al-Fam collective in Rabat.
Jan 23, 2017
Spread the love

Rabat – The feud between Uber and Casablanca cabbies is taking a dark turn as more and more Uber drivers are getting attacked by local taxis.

A recent video circulating on social media shows half a dozen red cab drivers surrounding an Uber vehicle in the middle of the road, cutting off the Uber driver’s route as the drivers stalked her.

Uber drivers are finding themselves ambushed by furious local taxi driver who are protesting what the cabbies call a “disloyal competition.” The outlawed drivers are then forced out of their vehicles and, as in this case, many times they are physically assaulted, before being handed over to the police. The Uber vehicles are also vandalized.

In the case of this particular video, recorded by an internet user, an ambush is shown targeting Uber drivers on Saturday night on Resistance Boulevard by a group of Casablanca red cab drivers. The woman at the wheel of what appears to be an Uber vehicle, was confined by the red cab drivers and later physically assaulted.

Uber, an American company, has been illegal in Casablanca since a district decision back in August 2015. It still, however, has continued to operate in the city, sparking the wrath of local cabbies.

In the last six months, Casablanca’s streets have become a taxi war zone with numerous car chases, threats and vandalized vehicles being reported as frustrated taxi drivers have taken matters into their own hands.

Interviewed by the AFP, Meryem Belqziz, CEO of Uber Morocco, says that Uber is not a transport company like taxi firms, but simply an app that connects independent drivers with passengers.

A week ago, Belqziz asserted that incidents of harassment were isolated and that Uber was employing security measures to protect its drivers. This recent video, however, proves otherwise.

Many social media users have expressed their outrage at the blunt force used by the local taxi drivers, denouncing their violence and their aggressive behavior and, in turn, showing their support for Uber.