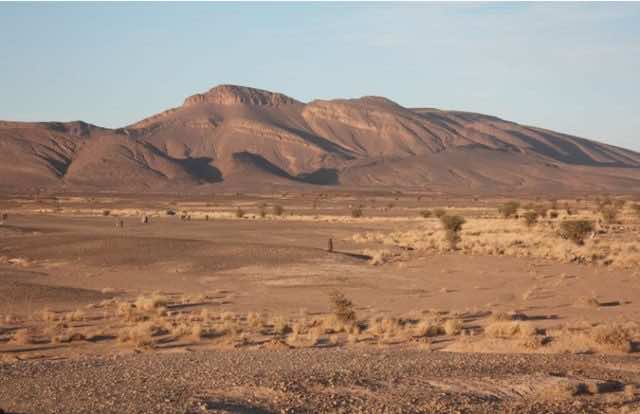 Rabat – 70 percent of the residents of Erfoud live on the sale of meteorites.  Geology scholars are push for new laws to put an end to the “Mafia.”

These extraterrestrial rocks are extremely popular for international trade in Morocco, reported the Middle East Eye (MEE). Located in the southeastern Moroccan desert, Erfoud has been able to preserve asteroid rocks, unaffected by water or damp soil.

Erfoud residents of all ages search the desert for fragments of these exquisite rocks, which they then sell to shopkeepers.

In the market, the asteroid fragments are valued according to “size, rarity, beauty and provenance,” said the MEE. An average rock can be valued at US $30, while a more unique peace can produce a profit of US $70.

“The stone business rescued many nomadic families from poverty,” said Ismail Mohammed, a member of a nomadic family, to MEE. According to Mohammed, many nomads have been able to carry comfortable lives because of the market.

French geologist Louis Carion introduced the meteorite business to Erfoud in the 1990’s. Carion told MEE that he and his family distributed pieces of meteorites to nomads, enabling them to distinguish real meteorites from regular rocks.

Since then, the market continued to grow. According to the BBC, an over 700,000-year-old meteorite landed in Morocco in 2011. The rock, named Tissint, is said to be the most important meteorite to have fallen in the last century. It was later sold to London’s Natural History Museum for a price greater then the museum’s entire acquisition budget.

Morocco’s most recent mining legislation was issued in 1951, but according to the MEE the laws on meteorite sales are unclear.

Moroccan scholars such as Mohamed Boutakiout, a paleontology professor at Rabat’s University Mohammed V, want official laws against meteorite trade to be established. Along with his organization, the Association for the Protection of Moroccan Geological Heritage, Boutakiout has proposed law amendments to government officials, but they are still under negotiation.

According to the MEE, Boutakiout describes meteorite trade workers as a “mafia”.

“[Meteorites] belong to our country, to our history and it is a great heritage for our young generation,” he said.

Carion disagrees with the establishment of laws that will prohibit the sale of meteorites, as he believes it will lead the region to poverty.

“If the government closes the market, people are going to starve,” he told the MEE.