Casablanca - Rabat is set to host a major exhibition of 115 works of Pablo Picasso at the Mohammed VI Museum of Modern and Contemporary Art (MMVI) between May 17 and July 31.

Casablanca – Rabat is set to host a major exhibition of 115 works of Pablo Picasso at the Mohammed VI Museum of Modern and Contemporary Art (MMVI) between May 17 and July 31.

115 works of Spanish painter, sculptor, designer, poet, and playwright, Pablo Picasso, will come together for the first time in Morocco. The exhibition titled, “Facing Picasso,” will be housed at the Mohammed VI Museum of Modern and Contemporary Art, beginning May 17.

Colline Zellal, Heritage Curator at the Picasso-Paris National Museum and Curator of the exhibition, referred to it as “a real event,” while the director of the museum, Abdelaziz El Idrissi, said that having “115 works of Picasso in one and the same space is a dream.” El Idrissi added that Moroccans “will see for the first time, reference works that they have seen only in textbooks.”

Addressing the chronological sequence represented in the exhibition, Zellal said:

“We begin the very first years of his production with a painting that Picasso made when he was 14 years old (La fillette aux pieds nus, 1895), and we go to the end of his life with one of his last self-portrait ‘The Young Painter’ (1972). “

Zellal explained that the idea of the event is to shed light on the different styles the artist endorsed and revolutionized throughout his life with a theme that provides a common thread throughout the journey, “that of the artist and his model.”

“It is a playful journey, marked by works considered as references, from the beginnings of Picasso to his last days, which means that it is a complete journey of one of the masters of artistic creation in the world,” said El Idrissi. He noted that the exhibition will be an opportunity to explore the African roots of the artist’s inspiration, which gave rise to cubism. 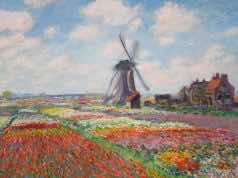