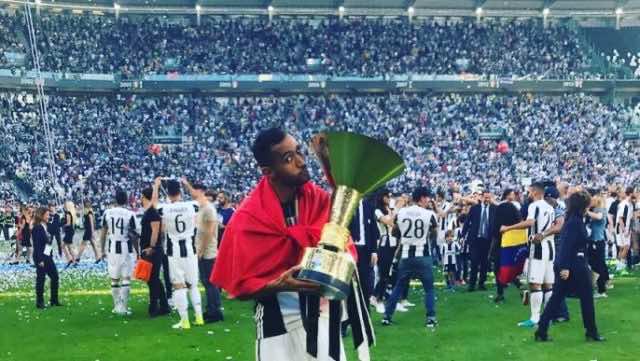 Juventus defeated Crotone with a 3-0 victory in the 2017 Coppa Italia final game.

During his team’s celebrations of the title win, the former Morocco team captain walked into the pitch alongside his three children carrying the Moroccan flag on his shoulders.

Benatia is the second Moroccan to win the Calcio after Houcine Kharja with Intern Milan in 2011.

Recently, Benatia was a victim of racism during a live interview with Italian TV channel Rai. The Juventus defender was interrupted and called a “Moroccan sh*t” by an unidentified voice during the interview following his team’s draw against Torino. He abruptly ended the conversation.

The Italian broadcaster claimed afterwards that they had faced technical difficulties before the interview and that it was not them who made this comment.

Later on, the former Moroccan national football team captain posted a statement on Instagram saying an investigation into in incident is under way.

The footballer ended his statement with a message to both Moroccans and Italians. “I am Moroccan and I am extremely proud of it.”

Juventus released a statement expressing its concern over the incident. “Everyone – and the player first – and foremost – deserves an explanation about what occurred”, said the Italian club.