Rabat - Members of a small community in the USA who claim to be descendants of the Moors, pledge allegiance to the Kingdom of Morocco and its king. 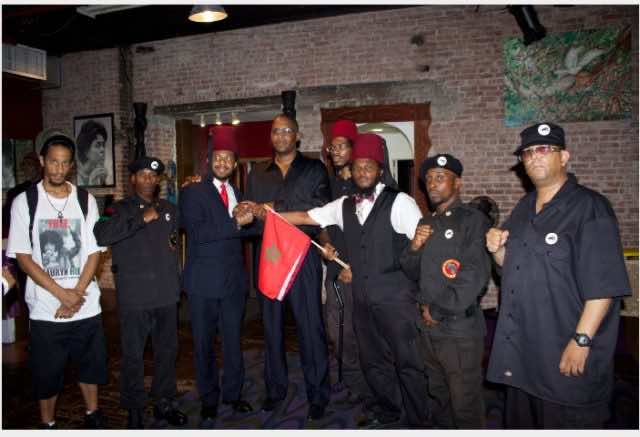 By
Chloe Koura
-
Chloé Koura is a final-year student of Arabic and Latin at the University of St Andrews.
May 27, 2017
Spread the love

Rabat – Members of a small community in the USA who claim to be descendants of the Moors, pledge allegiance to the Kingdom of Morocco and its king.

With temples across 15 states, the Moorish Science Temple of America is a religious group that believes all African Americans are Moors descended from northwest Africa.

The movement’s official website calls its followers believers of the “Mohammedan religion,” stating that their aim is to “help in the great program of uplifting fallen humanity and teach those things necessary to make our members better citizens.”

The group emphasizes racial pride. Once labelled a “sect or cult” by the FBI, the Moorish Science Temple of America contests the generally-accepted origins of African-Americans. Instead, they claim that calling somebody an African American is “a misnomer for the Moors of America.” Noble Drew Ali, the founder himself, alleged that the “true nature” of those considered African Americans had been withheld from them.

Group members claim to follow Islam, saying they possess a secret part of the Koran. According to Ali’s memoirs, he received a “divine revelation” after meeting an Egyptian teacher, and the members use these manuscripts during their religious ceremonies.

The movement was founded by Noble Drew Ali in 1913 inNew Jersey, its strong sense of identity appealing to African Americans struggling under racial and economic oppression.

Born Timothy Drew in 1886, there are varying reports about both the founder’s background and upbringing: one says he was the son of slaves, another says he was the child of a Cherokee mother and Moroccan Muslim father. Called a Prophet by the Temple’s followers, Ali’s motivation for creating the movement was to give African Americans an identity in a racist America and to unite them with their hidden past, this history being that people of colour were descended from Moors and Muslim.

Due to religious and racial disputes with the government and local residents, the group moved to Chicago in 1925. It was here, a city that the group has since called a “new Mecca,” where the group became officially registered under the religious corporation law of the State of Illinois.

To join the movement, one must recognise their Moorish origins by demanding their symbolic nationality as Moroccan and abandoning the history previously learnt. Upon being accepted, members are given a card to show their Moorish identity, adding “El” or “Bey” to their surname. The changing of the surname was introduced to demonstrate their identity by rejecting the European names they had been given, and paying homage to the surnames of their ancestors, which had been lost in slavery.

Keen to show off their rediscovered identity, the men wear a Fez, the hat strongly associated with Morocco. Rather than wearing the traditional hijab, women members opt to wear a turban and dress in loose-fitting clothing.

Polygamy is acceptable within the group, and the founder himself was notable for his numerous wives. An article in a 1929 edition of The Chicago Defender said that Ali had the power to marry and divorce as he wished.

In 1929, following a dispute about funds and the death of leader Drew Ali, different factions and even entirely different groups arose, many of which survive today. The most well-known of these is the Nation of Islam, though they have outright rejected having any historical connection with the temple.

While the group stresses that members abide by the law, in recent years members of the group have been associated with negative press. In 2006, the leader of a group accused of plotting to blow up Chicago’s Sears Tower claimed to belong to the Moorish Science Temple of America. More recently, alleged members of the group have filed fake court reports, but the group has distanced itself from those making them, labelling them “radical and subversive fringe groups” and “paperwork terrorists” unrelated to the group’s faith and teachings.

In March 1990, the Moorish Science Temple of St. Louis delivered a “Moorish Resolution” to Morocco, which was received by King Hassan II’s Minister of State Moulay Ahmed Aloui.