Alpha Barry, Burkina Faso’s Minister of Foreign Affairs, said in a meeting with his Moroccan counterpart Nasser Bourita in Rabat that his country welcomes Morocco’s request to join ECOWAS.

According to a statement by the Moroccan Ministry of Foreign Affairs, Barry explained his country’s support for Morocco’s bid by the fact that the kingdom belongs to the same geographical area as the ECOWAS countries, Africa.

He added that Burkina Faso is ready to examine Morocco’s request to join ECOWAS.

Morocco made an official request to join the bloc in February, and has been since then campaigning to win the member states’ approval.

In April, the Ivory Coast expressed its support for the kingdom’s application.

During a meeting with Morocco’s ambassador to Yamoussoukro, the country’s Defense Minister, Alain Richard Donwahi, said the Ivory Coast will endorse the kingdom’s request, speaking on behalf of the President Alassane Ouattara.

The request to join the 15-member West African bloc came after a successful bid by Morocco to reintegrate the African Union (AU) in January.

Morocco has made African partnership a priority for its foreign policy. Requesting membership of ECOWAS is seen by Morocco as in line with this policy, with the kingdom stating that it would “crown the strong political, human, historical, religious and economic ties at all levels” with the bloc’s member countries. 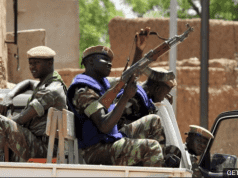