Rabat - Eco-Heat, an isotherm bag, allows food to be slow cooked using retained heat. The product, crafted by a Moroccan startup, is both simple and innovative. 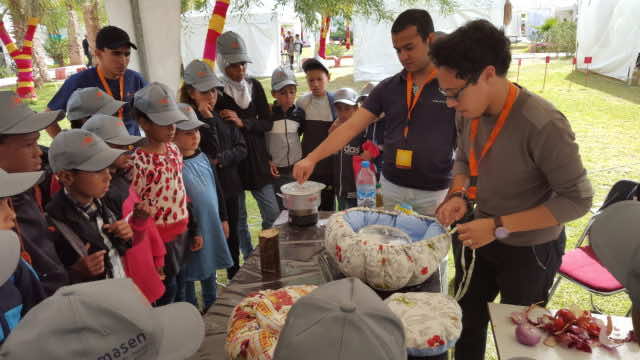 By
Erin Dunne
-
Erin Dunne graduated Phi Beta Kappa from the University of Michigan in the United States where she majored in History, French and International Studies.
Jun 14, 2017
Spread the love

Rabat – Eco-Heat, an isotherm bag, allows food to be slow cooked using retained heat. The product, crafted by a Moroccan startup, is both simple and innovative.

While Eco-Heat is low-tech and seems to resemble a poof or a Maharaja hat more than a traditional cooking device, the product has the potential to both save time and energy while also cutting back on pollution.

The producer of Eco-Heat is a startup of the same name which was founded in 2016 by Othmane Benhlima, Soumia Hasnaoui and Imane Mekkaoui who were all students at the engineering college EHTP Casablanca.

The students first were inspired to begin working on their product after they had the opportunity to visit parts of rural Morocco while participating in the Enactus program. During their visit, the students were stuck by the heavy reliance of gas, wood and coal for cooking and the fumes that were produced as a result.

When confronted with this problem, the three students came together to produce Eco-Heat which functions using retained heat. Once a dish has been boiled for 20 minutes, it can be placed in the Eco-Heat bag where the dish can continue to cook for between 90 minutes and five hours. This slow cooker method saves its users 75 percent of butane gas that would normally be consumed and 55 percent of the wood or coat that would have been used.

Not only does the product cut fuel usage but it also reduces the dangers associated with traditional cooking methods including smoke inhalation from domestic air pollution and increased risk of fire. To ensure that their product did fully cook food as intended, they also had food cooked in Eco-Heat tested by the National Office for Food Safety.

To make their idea a reality, the startup received support from several organizations. After partnering with Ford programs, the OCP Group, Enactus Morocco and Dare Inc, they were able to raise 200,000 MAD which allowed them to begin production and distribution.

The engineering students have also worked to protect their design by beginning patenting procedures with the Moroccan Office of Industrial and Commercial Property.

Although Eco-Heat was developed with rural cooking in mind, the startup recognizes that their product has broad appeal. The students are hoping to market it to travelers, campers and those living in urban regions as well. As Marwane Fachane, who worked with the startup during their time with the incubator Dare Inc., explained, “The average Moroccan consumer needs the product for two reasons: In urban areas, because he no longer has time to cook, and in rural areas, because he can no longer afford other alternatives such as gas, wood or electric furnaces.”

With this in mind, the team has developed a tiered price scale. For urban consumers, they will market the product at 350 MAD while rural consumers, subsidized by urban sales, will only pay 70 MAD.

So Eco-Heat’s strategy seems to be working. They have already closed sales in Morocco and Senegal and have plans the increase production in coming years.