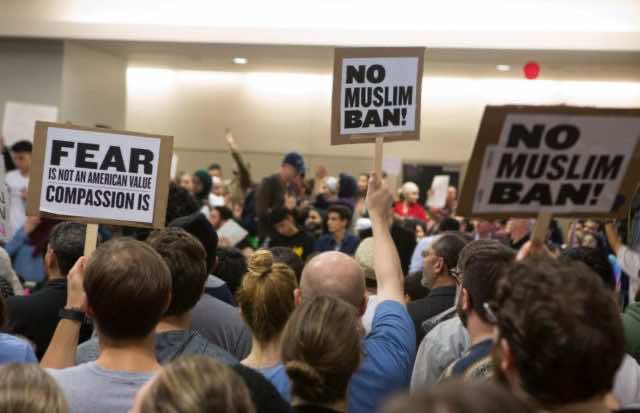 Rabat – The Supreme Court yesterday granted the Trump administration’s petition for certiorari to hear its appeal of the two court decisions putting on hold the travel ban that would suspend foreign nationals from six predominantly Muslim countries (Iran, Libya, Somalia, Sudan, Syria, and Yemen) from entering into the United States for a period of 90 days, reported politics-focused newspaper The Hill on Monday.

The Supreme Court ruled to reinstate part of the travel ban for individuals without a “bona fide relationship” with the U.S., and this partial ban will go into effect on Wednesday, 72 hours after the issuance of the Court’s ruling.

The court’s decision to reinstate in part the travel ban for individuals without any connection to the U.S. is based upon finding an equitable balance between “the government’s compelling need to protect National security,” and the harm that the ban would inflict upon those in the U.S.

“The government’s interest in enforcing [the travel ban is] undoubtedly at [its] peak when there is no tie between the foreign national and the United States,” said the majority.

Given that preserving national security is “‘an urgent objective of the highest order,’” the Court stated that, “To prevent the Government from pursuing that objective by enforcing [the ban] against foreign nationals unconnected to the United States would appreciably injure its interests, without alleviating obvious hardship to anyone else.” Thus, it lifted the ban in so as far it applies to those individuals without a “bona fide relationship to a person or entity within the U.S.”

Three Justices, Thomas, Alito, and Gorsuch, concurred in part and dissented in part. In a separate opinion written by Justice Thomas, they said they would have removed the stays of the travel ban in their entirety.

The Supreme Court is usually reluctant to decide a case unless there are conflicting opinions in the circuit courts of appeal below. Here, both the Fourth and Ninth Circuit courts upheld the district courts’ rulings staying the ban.

The Fourth Circuit had held that the primary purpose of the travel ban was religious, “was motivated principally by a desire to exclude Muslims from the United States, not by considerations relating to national security,” and therefore violated the First Amendment.

The Ninth Circuit found that Trump had failed to follow the procedures and regulations established under the Immigration and Nationality Act, and had bypassed the statute completely in issuing his executive order. Noting that there were no required “findings” that the “entry of the excluded classes would be detrimental to the interests of the United States,” the Court stated that “immigration, even for the President, is not a one-person show. The President’s authority is subject to certain statutory and constitutional restraints.”

The Hawaii district court had also stayed the provisions of the Executive Order which prohibited “the entry of all refugees for 120 days” and lowered the upper limit of incoming refugees “from 110,000 to 50,000 for the 2017 fiscal year.”

The Supreme Court’s decision lifted the stay to the extent that refugees who do not have a bona fide relationship to a person or an entity in the United State will be subject to the ban.

The Supreme Court indicated that it will hear oral argument on the case after it resumes its fall term session which begins the first Monday in October.