Rabat - A 19-year-old Moroccan woman originally from the city of Sidi Qacem, was held captive, chained, raped, tortured, and starved during a whole month by her fiance in Casablanca.

By
Chaima Lahsini
-
Chaima Lahsini is freelance journalist and activist with the Al-Fam collective in Rabat.
Jul 5, 2017
Spread the love

Rabat – A 19-year-old Moroccan woman originally from the city of Sidi Qacem, was held captive, chained, raped, tortured, and starved during a whole month by her fiance in Casablanca.

A new victim joins the Moroccan chronicles of violence against women. Nouhaila, a 19-year-old young woman from Sidi Qacem, was found after Ramadan in a horrific state in her fiance’s apartment in the Hay Hassani district in Casablanca.

Kidnapped and held captive during the whole month of Ramadan, Nouhaila was subjected to the most gruesome kinds of violence and torture. Raped, burned, starved, and beaten, the young woman can barely hold her tears: “I can’t move,” she said in a heartbreaking video. “Everything hurts. My legs are bruised.”

Short breathless sentences is all Nouhaila can manage: “I lived a month of terror, day and night […] assault and torture and rape and no one to save me.”

Nouhaila told Hespress that her aggressor not only physically abused her, but also raped her daily.  “He didn’t fast. He raped me everyday,” she moaned between tears.

As she laid writhing, neglected in her hospital bed and unable to rest her traumatized body, Nouhaila told Hespress that she received no care from the doctors in Hay Hassani medical center. The young woman, who was tortured by her sadistic fiance in front of his mother’s eyes, could barely eat or sleep. She simply spent her days awake, screaming and crying in agony.

“A whole month of torture. He put out cigarettes all over my body, including my intimate parts, and he shaved my hair and put out the cigarettes in my scalp. He also carried me to the bathroom as I was bleeding and poured salt over my wounds so that I feel unbearable pain,” the young woman recounts.

Nouhaila finally manage to flee after a hellish month. Screaming for help out of a window her assailant accidentally left open before going out, neighbors were able to hear her weak cries and immediately informed the local authorities.

With a court order in their hands, police officers moved to the scene and broke down the apartment door located in the fourth floor of a building in the Lissasfa neighborhood. They found Nouhaila in chains and in a dired health state.

Head shaved and scalp burned, arm fractured, body bruised and swollen, the young woman was immediately transferred to the emergency room of the Hay Hassani hospital. The aggressor was soon after arrested on his way back home, as neighbors circled him and handed him to the police.

The 30-year-old, described as an “introverted” but “normal looking” individual lived with his mother in the apartment she owned. A week before the month of Ramadan, the unnamed criminal asked Nouhaila, his fiancee, to accompany him to Casablanca to meet his mother.

Once he managed to isolate his victim, the assailant uncovered his true sadistic self and subjected Nouhaila to some of the most cruel anguishes a human being could experience.

Once arrested, the aggressor confessed to have asked the relatives of the victim for a ransom, threatening to kidnap their second daughter if they filed a complaint. Nouhaila explained that fear over her young sister’s safety was the main reason she did not consider escaping. 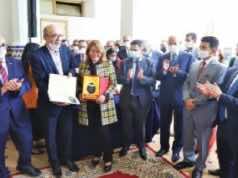