Rabat - Residents of Talkeetna, Alaska, are mourning the loss of their mayor of the past twenty years, Stubbs the cat, who passed away peacefully Friday.

Rabat – Residents of Talkeetna, Alaska, are mourning the loss of their mayor of the past twenty years, Stubbs the cat, who passed away peacefully Friday.

“Stubbs lived for 20 years and 3 months. He was a trooper until the very last day of his life; meowing at us throughout the day to pet him or to come sit on the bed with him and let him snuggle and purr for hours in our lap. Thank you for the past 31 months,” the notice read in part.

Named Stubbs because of his shortened tail, Stubbs was first elected mayor of Talkeetna in 1997 when he name was put forward by residents frustrated with their choice of human candidates. His repeated mayoral victories made Stubbs a bona fide tourist attraction.

Stubbs passed away peacefully, curled up in his bed with adopted kitten, Aurora. Since his passing, messages have been flooding in to the grieving town including this #RIPStubbs tweet; “Good news; I’m in Heaven. Bad News; ALL DOGS GO TO HEAVEN.”

There is no word yet as to whether his successor will have two legs or four. 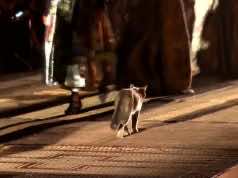 Cat Steals the Show on Dior Runway in Marrakech