Rabat - Ajax Amsterdam and its fans paid a touching tribute to the young Dutch-Moroccan football player Abdelhak Nouri,  during the team’s game Nice on Wednesday at the Amsterdam Arena stadium. 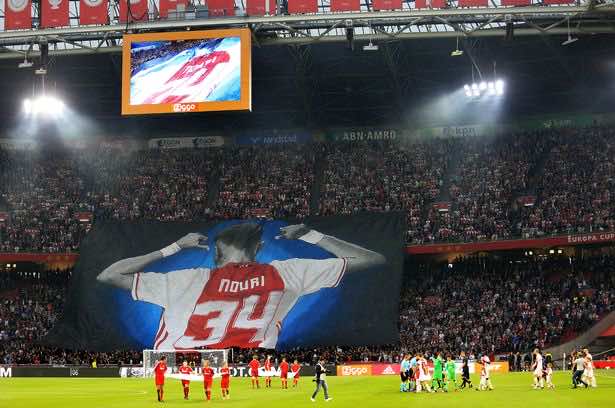 Rabat – Ajax Amsterdam and its fans paid a touching tribute to the young Dutch-Moroccan football player Abdelhak Nouri,  during the team’s game Nice on Wednesday at the Amsterdam Arena stadium.

Nouri received from permanent brain damage in July after collapsing during a friendly match against Werder Bremen.

A video published on the team’s official Twitter account showed fans displaying a huge banner in tribute to Nouri at the beginning of the game on Wednesday.

Thirty-four minutes into the first half, Ajax supporters gave an emotional standing ovation to the 20-year-old midfielder. They choose the 34 minute mark as the number refers to the player’s jersey number.

In another video posted on Ajax’s Twitter account, Nice and Ajax footballers appear pausing for a moment to participate in the tribute.

Nouri’s father and brother were present during game and seemed touched by the heartfelt tribute.

Last month, Ajax fans gathered together outside the Nouri family home, showing support and sympathy to the player’s family and holding the #StayStrongAppie slogan

Nouri collapsed on July 8 during a friendly game between Ajax and Werder Bremen in Austria. He was flown to hospital and later on was declared to have suffered brain damage.

Several football stars and clubs have shown since then support for the young talent and his family.