Rabat - Once again, the French satirical newspaper Charlie Hebdo is at the heart of a controversy after publishing a drawing that linked Islam with terrorism following the terror attacks in Barcelona where 13 people and more than 100 injured when a van plowed through a large crowd in the city's Las Ramblas avenue. 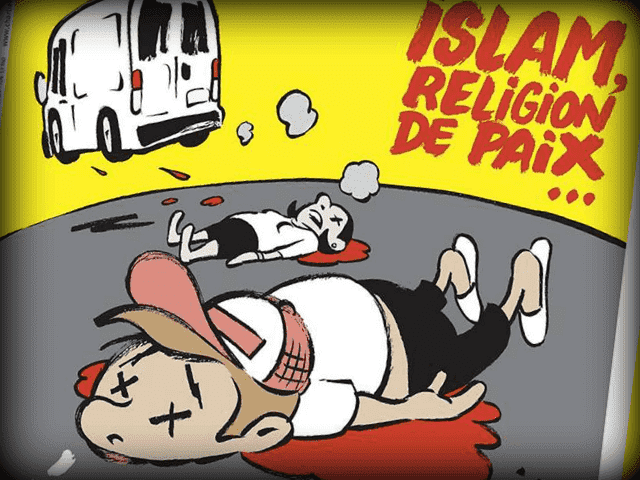 Rabat – Once again, the French satirical newspaper Charlie Hebdo is at the heart of a controversy after publishing a drawing that linked Islam with terrorism following the terror attacks in Barcelona where 13 people and more than 100 injured when a van plowed through a large crowd in the city’s Las Ramblas avenue.

The  Charlie Hebdo drawing shows people getting run over by a van, their blood spilling out, with the caption: “Islam: A religion of peace.”

The drawing was met with mixed reactions from social media users, with some denouncing it and others defending the paper’s right to free speech.

“Charlie Hebdo is the worst (toilet) paper that I know,” said one Twitter user.
“People are shocked by a cover of Charlie Hebdo and not shocked by the terrorism around us,” said another Twitter, using defending the drawing.

Charlie Hebdo has been the subject of several controversies in the past where Islamic symbols, such as the Prophet Muhammad, were mocked, portraying the religion as violent and synonymous with terrorism.

In 2006, the French satrirical paper reproduced the now-infamous charicatures by Danish cartoonist Jyllands Posten, which depicted the Prophet as a terrorist.

In November 2011, the paper published a special edition called “Charia Hebdo” following the victory of Islamist Tunisian party Ennahda in the general elections. A night before the paper was to be distributed, its headquarters were attacked.

While the French newspaper continued with the same tone after the tragic incident, gaining more support for its editorial line in the name of free speech, many have pointed out its deliberately provacative stances, which specifically target Muslims.

In 2008 Maurice Sinet, a.k.a Siné, one of its main cartoonists, was fired after he published a column in Libération deemed anti-Semitic. In the article, that Jean Sarkozy, the son of former French President Nicholas Sarkozy, would have increased career success if he indeed converted to Judaism in order to marry his Jewish fiancée.