Rabat - Following filmmaker Mahmoud Frites' Facebook post inciting his followers to rape Moroccan gay public figure Adam Lahlou, known as “Adouma,” the internet celebrity has been harassed, threatened, insulted, and beaten in the streets of Tangier by a group of three men. 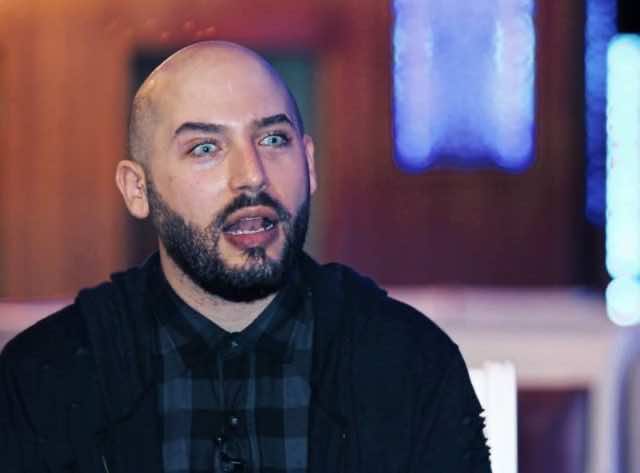 Rabat – Following filmmaker Mahmoud Frites’ Facebook post inciting his followers to rape Moroccan gay public figure Adam Lahlou, known as “Adouma,” the internet celebrity has been harassed, threatened, insulted, and beaten in the streets of Tangier by a group of three men. 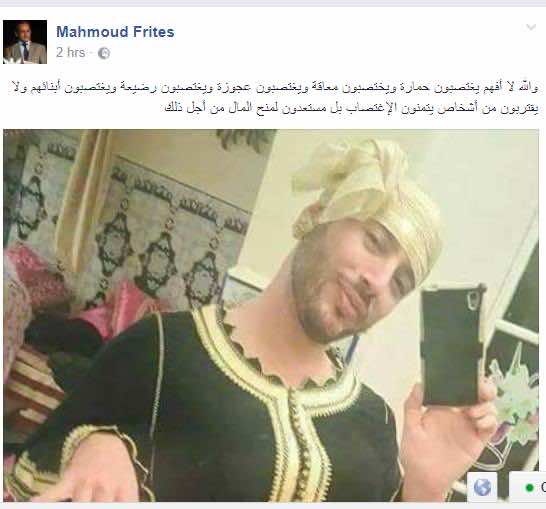 On August 25, Adouma was on his way back home when a group of people publicly assaulted him, according to a message he posted on Facebook. They hit him in his head, eyes, and neck. They also torn his clothes, insulted him, and threatened to kill him.

Lahlou took to Facebook to condemn the incident. “I was attacked after [Frites] called on people to rape me. He said I am willing to pay money in exchange for being raped!”

In his post, which has received over 4,000 likes, he continued to say that “today, I say to you, Mr. Frites, congratulations, you have achieved your goal.”

In response to the violent aggression Lahlou addressed Frites, saying that “According to your words, you are a director, a fighter, an artist,” while in reality, “you are devoid of humanity, and you are a terrorist in disguise.”

“I am a man with feelings, circumstances and a life like all people. No one deserves rape. If we were in Europe, you would be held accountable and punished for inciting people to rape me. It is you that is morally abnormal [not me].”

In a private conversation shared on the internet between Frites and an unknown Facebook user, the film maker claimed his post was “misunderstood.” 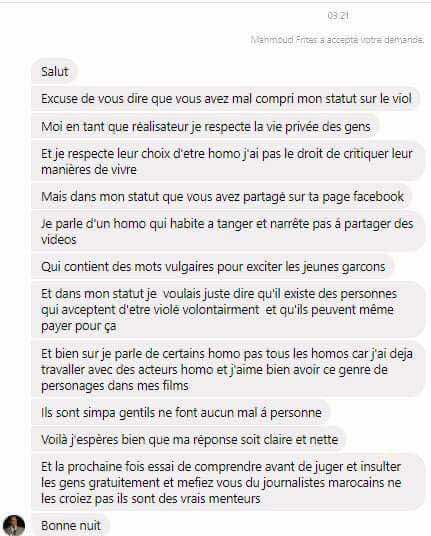 “I, as a film maker, respect the private lives of people. I also respect people’s choices of being homosexual and I understand that I have no right to criticize their ways of life.”

He went on to say that in his post, he was specifically talking about one gay man “who does not stop making vulgar videos, which arouse young boys.”

For him, gay people are “nice” and he “likes to work with them in his films.”

He concluded the conversation asking his interlocutor to “try to understand people’s intentions before judging and insulting them and to watch out  from Moroccan  journalists because they are liars,” referring to the criticism he has received on social media since urging people to rape Lahlou.