Rabat - From the continent of enduring tradition to the artistic scene of London, 10 Moroccan artists will cross the  Atlantic to feed the kingdom’s artistic and cultural tradition into the art word of the English capital for the 1:54 Contemporary African Art Fair, to be held October 5 to 8. 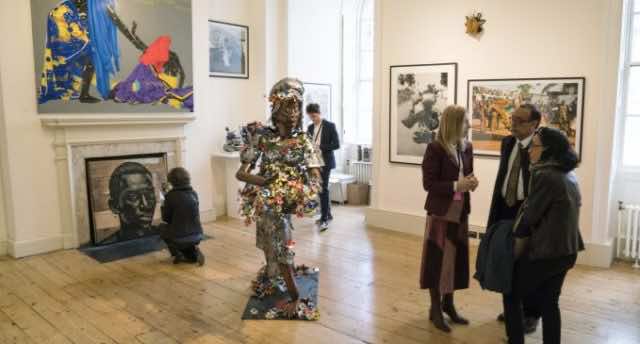 Rabat – From the continent of enduring tradition to the artistic scene of London, 10 Moroccan artists will cross the  Atlantic to feed the kingdom’s artistic and cultural tradition into the art word of the English capital for the 1:54 Contemporary African Art Fair, to be held October 5 to 8.

The event, which has grown from a mere 15 hosting galleries in its first edition in 2013 to over 40 this year in London, will bring together 42 galleries from 17 countries, 11 of which will be participating for the first time.

“We are delighted to announce such a diversity of exhibitors for our 5th edition in London. We will welcome new galleries as well as countries that will exhibit for the first time but also many regulars. And we are especially proud to count on a strong participation of galleries of Africa,” said Moroccan Touria El Glaoui, the event’s founder.

Marrakech’s Gallery 127 and Voice Gallery and Casablanca’s Atelier 21 will bring into view their photographers, painters, and visual artists as they participate in the fair.

Delving beyond the question of post-colonial Morocco, the exhibition is intended as a space for exchange and dialogue of the pertinent themes that mark African identity.

1:54 has chosen Moroccan artist Hana Tefrati to give a performance, under the title ‘Desire Path,’ calling attention to the marginal spaces occupied by the gay community in the kingdom.

Moroccan artist Hassan Hajjaj has been selected to showcase, through his playful, multi-layered works, the diverse identities that make up “Moroccanness.” His exhibition will shed light on North African culture alongside familiar Western imagery and iconography.

Marrakech-based gallery Le 18 I Screen will examine movement, exile, and identity through a series of documentaries and films from regional and international scenes in unusual places such as cafes, squares, streets and gardens, on issues linked to cultural and spatial heritage, particularly in the context of a declining public space.

One continent, 54 countries and artists from Ethiopia, South Africa, Kenya and several other African nations will occupy an artistic space to explores strengths and weaknesses of contemporary African Art and its expressiveness.

Since its launch in 2013 by El Glaoui, one of the “Most Powerful Women” in 2015 according to Forbes,1:54 has become the leading international art fair dedicated to contemporary African art, giving visibility to the artists, professionals, and galleries of Africa and its diaspora.