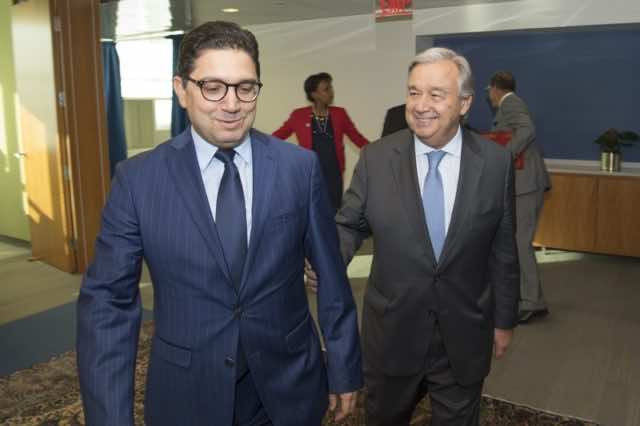 The minister, remarkably active in the sidelines of the UN’s General Assembly, has held several meetings with diplomats representing dozens of countries and organizations.

During his meeting the Guterres, Bourita told the UN Secretary General that Morocco is committed to development, preserving peace and countering terrorism, according to a statement by the Moroccan Ministry of Foreign Affairs posted on Facebook.

The minister also expressed Morocco’s commitment to take its share of responsibility in trying to find solutions to the challenges facing the world of today.

For his part, Guterres saluted Morocco’s efforts in migration, climate change and countering terrorism thanks to the leadership of King Mohammed VI. During the meeting, the UN chief asked Bourita to pass his greetings to the monarch.

The situation in Libya was also a subject of discussion between Bourita and Guterres. Rabat hosted in 2015 rounds of dialogue under the UN umbrella between warring Libyan parties.

No mention of the question of Western Sahara was made in the ministry’s statement.

On Wednesday Bourita addressed the UN’s General Assembly. In that speech too, the minister outlined Morocco’s stances on different issues, including Western Sahara.

In his speech, Bourita said that because of this issue, which certain parties, in clear reference to Algeria and Polisario Front, the Maghreb regional is suffering from lack of regional integration.

On the other hand, he affirmed that Morocco’s reintegration of the African Union (AU), reflected “sense of pride and belonging to Africa.”