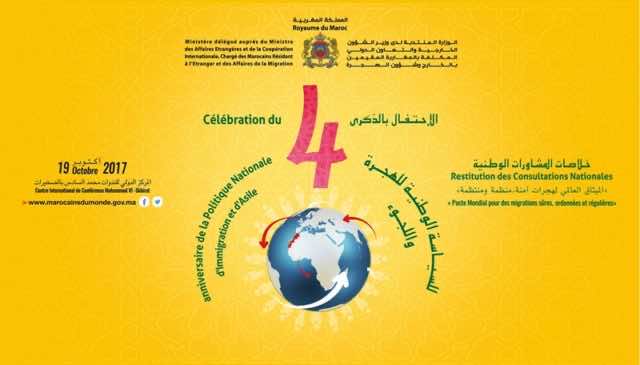 Rabat – The Ministry of Foreign Affairs in charge of Moroccans Living Abroad and Migration Affairs will celebrate the fourth anniversary of the launch of the National Policy on Immigration and Asylum on October 19 in Skhirat, said the ministry in a statement.

This fourth anniversary takes place in a new regional and international context characterized by major advances, both for Morocco and the migration issue at large.

According to the ministry, this celebration is a key event for presenting the results of the national consultations on the Global Compact for Migration and to highlight the main achievements regarding the implementation of the National Strategy for Immigration and Asylum during the period 2016-2017, as well as to discuss the fundamental challenges on migratory policies.

First, speeches will be given by representatives of African states and by Lacy Swing, Director-General of the International Organization for Migration, to share African and international perspectives on immigration and asylum.

A first plenary session will take placeto present the conclusions of the national consultations on Morocco’s contribution to the “Global Compact for Safe, Orderly and Regular Migration,” which was held September 26 to 29 in Rabat. This presentation will be followed by a round table gathering public officials, civil society and international organizations.

Finally, a second plenary session will present progress made in the implementation of the National Strategy for Immigration and Asylum (SNIA), through the presentation of the 2017 Strategy report, which will be followed by a panel discussion with public officials and international organizations.

All the partners involved including public authorities, civil society and international organizations were consulted to complete the 2017 final report.