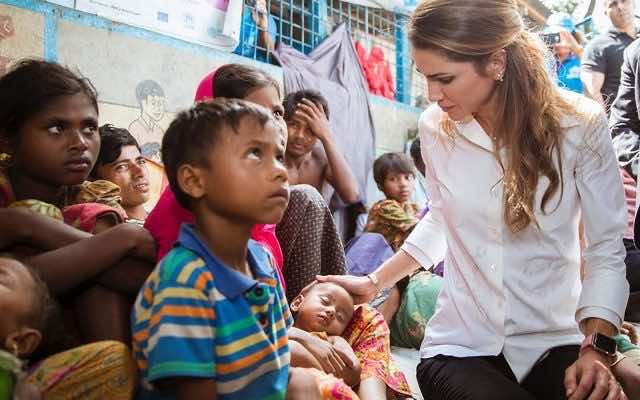 The queen met with families and children of the Rohingya Muslims, who have faced months of ethnic violence at the hands of the Arkan Rohingya Salvation Army (ARSA) in Myanmar.

The queen took to her Instagram official account Monday morning to express her solidarity with the Rohingya Muslims. “Almost 600,000 Rohingya Muslims have fled Myanmar to Bangladesh in the past two months,” said Queen Rania.

“For years, the Rohingya people in Myanmar have been victims of discrimination, injustice, and oppression. Sadly, this systematic persecution of a religious minority is taking place in full view of the world. The international community must put an end to their suffering and safeguard their rights,” she wrote.

Violence against the Rohingya Muslims became the target of international media attention in late August, when the Arakan Rohingya Salvation Army (ARSA) began unleash a wave of repression against nearly 300,000 members of the Myanmar’s Rohingya Muslim minority, out of the total population of approximately 1 million.

Almost 600,000 of Rohingya Muslims have fled to Bangladesh since August in order to escape violence in Myanamar, often living in camps dire conditions.

Safe from the Myanmar army, refugees in Bangladesh are now threatened by disease in the unplanned sites, according to the United Nations Refugee Agency (UNHCR).

The UNHCR said it is “very concerned that the lack of clean water and unsanitary conditions that prevail in the vast tangle of informal camps and settlements could erupt at any time into a full-blown health crisis.”