Rabat - Moroccan author and painter Mahi Binebine failed to scoop the 2017 Renaudot Prize after reaching the third and final round of the competition with his novel Fou du Roi “King’s Fool”.

Rabat – Moroccan author and painter Mahi Binebine failed to scoop the 2017 Renaudot Prize after reaching the third and final round of the competition with his novel Fou du Roi “King’s Fool”.

The 2017 Prix Renaudot was given to French author and journalist Olivier Guez for  La Disparition de Josef Mengele. Guez succeeded French playwright and novelist Yasmina Reza, who was awarded with the 2016 Prix Renaudot for her novel, Babylon.

Binebine’s novel reached the third final round after an intense competition, which saw the nomination of two Moroccans, Binebine and French-Moroccan author Leila Slimani, whose novel Sexe et Mensonges was eliminated in the second round of the competition.

Published in May 15, King’s Fool novel is inspired by Binebine’s father’s life, as a talented storyteller who entertained the Moroccan King Hassan II until his death in 1999.

The novel tells of how Binebine’s father maintained his loyalty to the King while rejecting his son, Aziz, a soldier who was imprisoned in Morocco’s most brutal prison, Tazmamart, for participating in the 1971 coup attempt against the King.

La Disparition de Josef Mengele tells the story of Josef Mengele, a German physician and officer, who joined the Nazi party in 1937. After World War II, the doctor fled toArgentina in 1949, where he worked in different places, under false papers. Through his novel, Guez narrates the physician’s journey and the secrets behind his escape from Germany to Paraguay, Brazil, and Argentina.

Binebine was competing against not only the award-winning Guez, but also France’s David Lopez, Anne Sophie Stefanini, and Patricia Rezinkov, a Franco-American author.

“It’s already a great victory to be in competition with these five novelists,” Binebine told the Moroccan TV channel 2M in an interview before the competition’s final round. 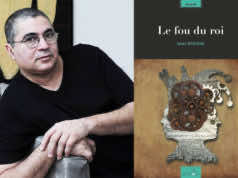