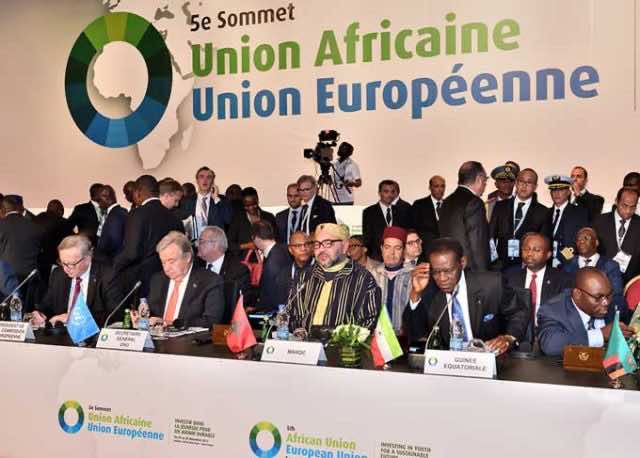 Rabat – In his capacity as the leader of the pan-African mandate on migration at the African Union-European Union Summit, King Mohammed VI delivered a speech on Wednesday in Abidjan saying that “if the Arab Maghreb Union (AMU) had really existed, we would have been stronger in the face of the migration challenge.”

“Relations between Africa and Europe have always been marked by human displacement and migratory flows. Tens of thousands of African migrants are trying to reach Europe every day, often putting their lives at risk,” the King said.

“Our regional groupings could have dealt with the situation more effectively. In fact, one could rightly think that if the Arab Maghreb Union had really existed, we would have been stronger in the face of such a challenge.”

But, continued the King, this is not the case.

”The AMU does not exist! And because of regional conflicts, migratory flows often fall prey to different trafficking networks, ranging from drug trafficking to terrorist networks,” he said,.“Morocco suffered from this for a long time, and still does today.”

Migration a Source of Opportunities

Morocco, as a continental crossing point, has the target of successive waves of migration due to its geographical location, the King explained. “Our European and Maghreb partners know this only too well.”

He also lamented the fact that migration has systematically been perceived not as a source of solutions and opportunities, but rather as a threat and a source of desperation.

“In today’s world, it has taken on a negative connotation, since it is being associated with drugs and other trafficking, and even with the damaging effects of climate change,” he explained.

A Time for Action

The Moroccan sovereign also expressed his concerns over the situation of migrants in Libya, denouncing the “atrocious practices” and describing it as an “utter denial of humanity.”

In this perspective, the King called on for action to find effective solutions to this phenomenon.

”Now is the time for action. […] I am saying it loud and clear: we can act. But we cannot accomplish everything and, above all, we cannot do it alone; European policy in this domain should change, ” he said.

“Today, a new vision is needed: we ought to turn immigration into a subject of peaceful debate and constructive exchange.”